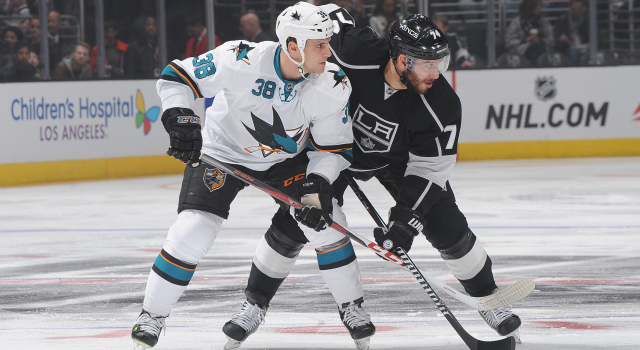 On the Kings’ performance in the 3-1 win:
We played the same game tonight as we did last game. [Reporter: But maybe got the results that you were looking for?] Well, obviously we win – that is the result – and we got a point last game, as I said. [Reporter: Kind of shut ‘em down, though, after the first couple minutes, and they got the goal. But then you really took it to ‘em.] Well, they scored on their first shot. I think the Toffoli goal was really important for us.

On the Kings scoring at least two power play goals in four straight games:
And we got seven out of eight points. [Reporter: That’s the more important statistic.] Yep.

On whether he’s “surprised” with Jamie McBain’s production:
He’s got some experience, and I think when Dean and Rob signed him, that’s what they were looking at, was the experience part of it. And when he’s in the lineup, you want him to produce, and you get him on the power play, he makes good plays. Takes some pressure off Drew, when you think about it, the right shot there.

On whether playoff positioning “matters”:
Playoff positioning? Yeah, it’s good to have a playoff spot April 16 or whatever it is. It’s not easy. [Reporter: Is it just being in the top eight, or-] Well, that’s what it is. It’s a 14-team conference, and eight make it. It’s very difficult to make it the way our division is. We’ll see. Your goal is to get in. That’s what you try to do. [Reporter: And it doesn’t matter, eight’s as good-] Well, you can’t buy your way in. You don’t get any extra points for something you did last year. It’s really simple math, and it’s difficult.