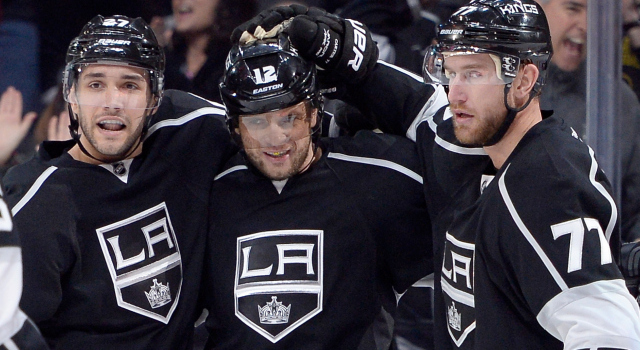 Marian Gaborik and the Kings navigated around a potentially sapping situation when it became clear that the forward who has goals in four straight games wasn’t injured by a heavy hit levied by Arizona’s Oliver Ekman-Larsson late in the third period during Saturday’s 4-2 Los Angeles win.

The hit occurred when Gaborik gained the Coyotes’ blue line with the puck and was sent to the ice by what appeared to be hard and legal contact by Ekman-Larsson.

“He just kind of got the right side of my head. I didn’t see him at all,” Gaborik said. “I never usually come up the middle like that where I try to put the puck in, I mean shoot on net. I just had no idea he was there. I should kind of be aware of that more.”

Tyler Toffoli made something of the perilous situation, taking a loose puck that had been chipped over Gaborik’s body and toe-dragging around his teammate before offering a crisp centering pass that Trevor Lewis banged past Devan Dubnyk for a third period insurance goal.

Gaborik said he saw a replay of Toffoli’s move afterwards.

“I just went to the bench. I was just kind of like a little out of it,” Gaborik said. “But I feel actually very good. It was good we scored, though.”

Gaborik, who has six total goals over his four game streak, skated opposite Jeff Carter on Anze Kopitar’s line at this morning’s skate. He’ll play against the Calgary Flames tonight.

“…We just have to keep it up and keep going,” Gaborik said. “We have one game before Christmas and before this break and we really need to focus and get these two points. That’s what matters for right now.”

Marian Gaborik, on his Christmas break plans:
I’m not sure. I will probably stay here. [Reporter: Are you going to head up to the snow in the mountains? They’re not far away.] I know. I don’t think there is much there, I checked the weather. We’ll deal with it tomorrow.