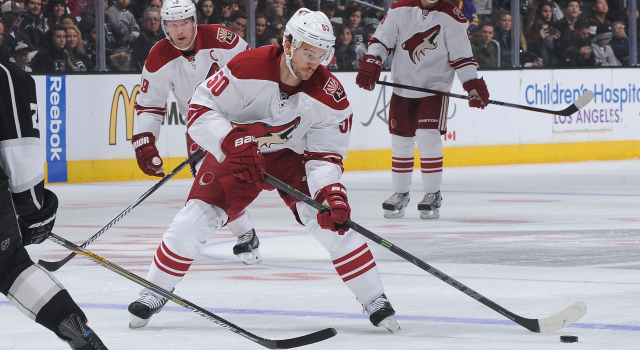 Dave Tippett, on the game:
My take is Dubnyk was outstanding. We got outcompeted on pucks. We got fortunate with a couple bounces to get ahead. But in the end, took three penalties in the offensive zone that cost us and got outcompeted in too many battles and gave up too many chances and didn’t win.

Tippett, on their special teams play:
Both sides you can use. Tonight we get a couple of penalty kills, maybe we can push the game along. On the other side when we couldn’t do that, our the power play had a couple chances to extend the lead or get back in the game and we couldn’t get it done. So those were big factors in the game.

Devan Dubnyk, on Los Angeles:
They’ve won two Stanley Cups in three years. They play hard and especially in this building they’re tough to play against. We put ourselves going into the third period on the road, and 2-2 we’ll take all the time. But a lot of penalties and some tough play at the end let this one get away.

Dubnyk, on Los Angeles’ power play:
In this league, I think anytime you continuously put a team on the power play it’s going to be difficult. It proved to be tonight. Obviously if they continue to go back in there and put their best players on the ice, moving the puck around, they’re going to make plays.

Dubnyk, on whether he was screened on Alec Martinez’s power play goal:
No, no ,no, I just got over and he made a good shot. It’s tough. I think he got it off a little harder than I expected, being the offhand that he is. I was deep in my net because they came from the other side through the blocks and had a bunch of guys coming from the other side. So I played a little deeper in case he made a slap-pass there.

Keith Yandle, on the penalty kill:
It’s pretty obvious when you’re playing a team like that and you’re giving them opportunities on the power play that at some point they’re going to make you pay. They’ve got a lot of skill. They’ve got a lot of guys who can make plays. We weren’t good enough on our power play. It’s just one of those things where some games you get outplayed in the special teams and that was the case tonight.