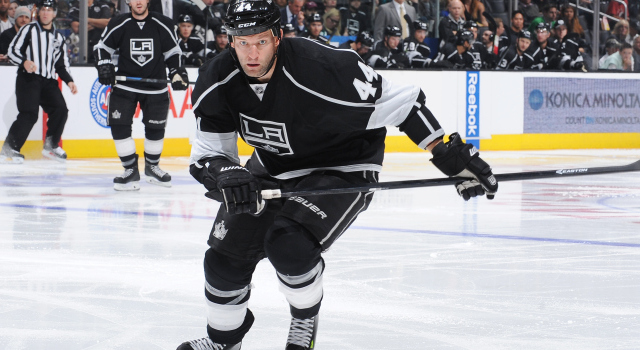 Robyn Regehr logged a total of 6:27 in Los Angeles’ 6-4 win over St. Louis on Thursday. His final shift ended 4:54 into the second period, according to the game’s play by play log.

Regehr was not credited with a blocked shot in the victory – not that that should discount Sutter’s information – though he did compile four hits. In the second intermission, a Kings PR representative emailed reporters to say that he suffered an upper-body injury and was not expected to return.

Based on several observations, there’s the possibility – not certainty – that the injury could be related to Regehr’s hand.

Think Regehr got hurt in a collision with Paul Stastny in the second. Looks like an apparent hand injury from the tape.

Saw Regehr outside Kings room – a couple of fingers taped on right hand, not sure if that is the issue – looked fine otherwise.

Again, these aren’t confirmations that the injury was a hand injury. More on Regehr’s status will be learned in the coming days.