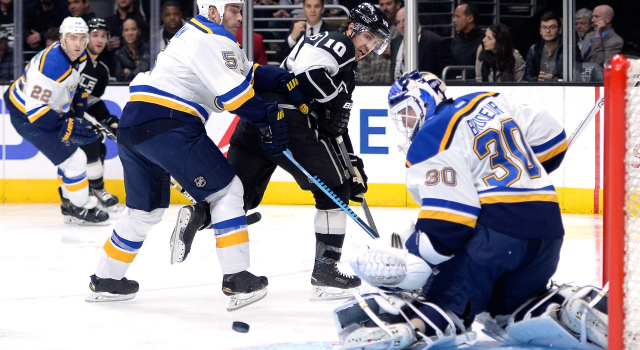 Martin Brodeur, on the loss:
It was a good for a bad to get that lead. I think we knew coming in for a long road trip that we needed to start a hard game. They took their medicine and after they got down they really picked up their game. They created a lot of offense, they played physical. I’ve got to give them credit. It’s not easy to come back from a three-goal deficit. But again, time was on their side. We’ve done it to the Islanders this year and in this new brand of hockey it happens.

Brodeur, on whether Los Angeles was making it hard for him to see pucks:
They were good. I was scrambling out there, I was trying to look. There was a couple saves I made I didn’t see, a couple of goals that went in that I didn’t see either. It’s the type of team. I think we turned the puck over a lot. Some of the clears didn’t go all the way down and it made a big difference in the way they came back in the game.

Brodeur, on Dwight King’s goal:
You know, I knew it was going to be a bad bounce so I wanted to cover the low part of the net. I didn’t expect that thing to kind of go right over my head. It was kind of like a lacrosse ball. It gained speed on the second bounce. It’s one of those bounces that never have happened to me before.

Brodeur, on how this Kings team compares to the 2012 team:
They play similar. I think they’re a big team to play against. They use it to their advantage. Kopitar is a guy that definitely drives the engine of that team and Carter is doing well and they have depth. They’re a good hockey team, but we played them well in our building and if we don’t shoot ourselves it would have been a better result today.

David Backes, on the penalty kill:
We’re in the box too much and that’s not helping our penalty kill. It’s tough minutes when you’re on the kill and we’ve got forwards that kill, but you’re battling for every second you’re out there. It’s hard minutes. We’ve got to find a way to clean that up, stay out of the box. If it’s a hard-nosed penalty, that’s one thing. But if it’s a trip or a stick penalty, we need to eliminate those and give ourselves a great chance to win every night.

Backes, on whether this loss was especially tough:
They gave up a 2-0 lead in our building and we gave up a 3-0 lead in their building. I don’t think that’s typical of either team. But it shows us that it’s a full 60-minute game and if you let your foot off the gas or don’t play the right way a little bit of time, all of the sudden a good team will make you pay and they did that tonight.