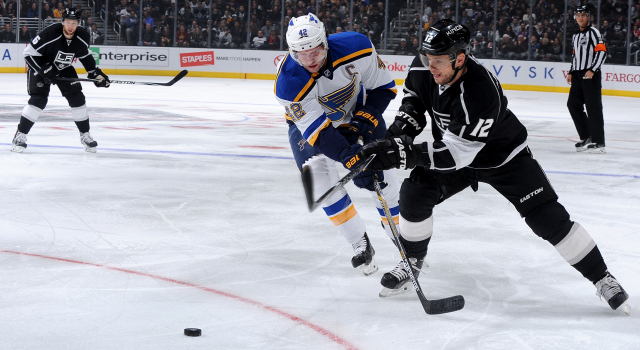 Marian Gaborik, on whether this was the game he, Anze Kopitar and Jeff Carter needed:
Yeah, obviously this is our team and it gives us quite a bit of confidence. Last game, we blew the third period and we’re talking about how we’re excited to come back and play these guys again. I’m glad we got these two points and we got on the board on the power play which is huge, just a 60-minute effort.

Gaborik, on the mood after going down by three goals and losing Robyn Regehr:
The mood was good. We were confident we could come back and we never quit here. Obviously it’s too bad we lost Reggie here, but we battled back for him. Like I said, everybody contributed.

Gaborik, on what he liked about the response when they went down 4-3:
Just the character here, obviously nobody was quitting. There was a positive energy in the room that we can come back and like I said, very positive. We capitalized on our power plays and we got big goals and the third period we found the one which was huge.

Gaborik, on what helped the offense to break out:
I don’t know. Obviously, the power play was good. We were throwing pucks at the net and just playing with speed and confidence. Looking out for each other out there definitely helps our team and helps us as a line as well.

Anze Kopitar, on what led to offensive chances:
All of the sudden we were moving the puck around pretty well and it just stuck with us. Some good things were happening and we were holding onto the puck. I think playing good neutral zone and defensive zone, and when you do that you get the opportunity to play in the offensive zone a lot more, which is obviously way more fun than it is playing D-zone and then just moving the puck, trying to get open for each other and it turned out good tonight.

Kopitar, on whether this game is the start of an upward trend for the team:
I hope so. Tonight was a good game, but now we just have to look ahead and try to stick with the things that make us successful and just try and keep it going.