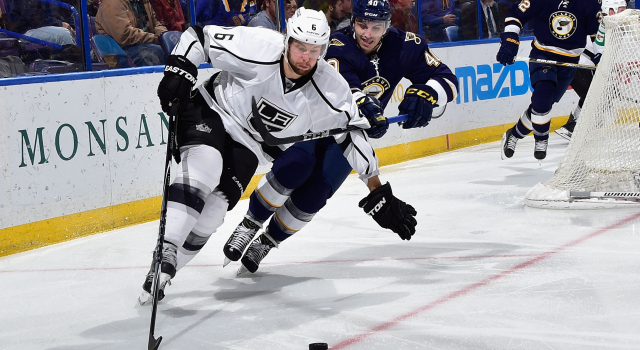 Justin Williams, on the loss:
We’re a team that usually closes things out leading after two. We didn’t do it tonight. [It’s] very frustrating.

Williams, on the team’s mood:
Regroup.

Williams, on how St. Louis’ five-on-three power play goal affected the game:
I don’t know. They shot a puck on a five-on-three, it went off a couple bodies and in the net. Hey, I don’t know. There are a lot of twists and turns in a game that indicate the result. We weren’t good enough in the third. [Reporter: Once that happened, it was a snowball effect?] Yeah.

Williams, on Vladimir Tarasenko:
Obviously he’s a very skilled player, a guy who we need to pay attention to and someone who seems to be leading their team right now.

Williams, on what adjustments he would like to see made in Thursday’s game:
I don’t know. The good thing is we get to play them right again, a chance for redemption.

Jake Muzzin, on whether St. Louis’ five-on-three goal had a snowball effect on the game:
They got one, then they got a little momentum, and then they got another one. We have the puck and we have to make plays with it. And we don’t and take penalties and they capitalize on the power play. We just have to be better on the road in the third period. We have more experience that we need to… we have a better group of guys that can make plays out there and we didn’t tonight.