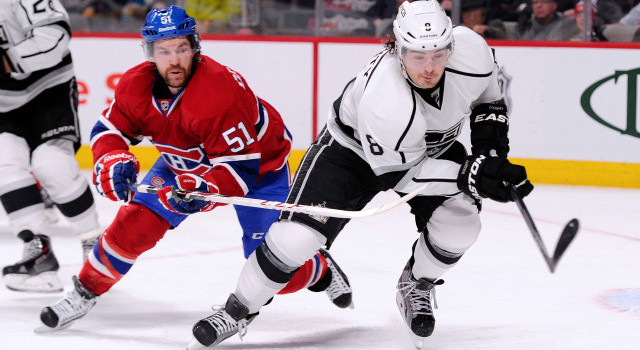 Earlier today Drew Doughty answered several questions from reporters who don’t get as many opportunities to cover the Kings. Jake Muzzin’s performance last night was a topic – “When he’s playing like that, I think we’re a pretty unstoppable pair,” Doughty said – as was the match-up against P.K. Subban one night after the Kings faced Erik Karlsson and the Ottawa Senators.

Drew Doughty, on facing Erik Karlsson and P.K. Subban on back-to-back nights:
I always want to outplay the opposing team’s best defenseman. I think last night I did it, for sure. Tonight is going to be a tough challenge. PK is a good player. I’m going to have to outplay him if we want to win the game.

Doughty, on whether it is special to play in California in the winter:
Yeah, we’re spoiled out there. It’s great playing out there where we’re turning into a hockey city. Our fans are amazing. All our support is great. Early on when I started playing there, the support wasn’t the same as it is now. Now, it kind of is like Canada where you have so many people coming to games and recognizing us outside of the rink. I love playing in Cali and I wouldn’t rather play anywhere else.

Doughty, on the atmosphere in Staples Center:
It’s very special. It’s loud. It gives us a lot of energy and that’s why we’re a good team at home.

Doughty, on whether it’s special to play in Montreal:
Yeah, it’s fun playing here in Montreal. The fans are great. We, even though they’re not cheering for us, get a lot of our energy from the crowd. We enjoy coming here, it’s a great city. Playing against the Canadiens, a historic team, is always cool for us Canadian boys. So we’re looking forward to it.

Doughty, on what he learned about Carey Price in last year’s Olympics:
Carey is a great goalie. Both he and Quickie are two of the top three or four goalies in the league, no doubt about it. It’s going to be tough to beat Carey tonight. We’ve got to get bodies in front of him because if he sees pucks, he’s not going to let any in. He’s one of our targets obviously.

Doughty, on how P.K. Subban can get to the next level when teams focus on him:
Yeah, that happens. You’ll fly by kind of your first two years and no one really knows what you’re about. Eventually their whole, sole priority is just to take you away on the power play. With P.K.’s big shot, guys are just going to stand in front of him now and guys are going to have to find some other space to find lanes and to find passing lanes as well. He’ll figure it out. He’s a good player and very good on the power play especially. I’m sure that he’ll be good tonight.

Doughty, on whether last night’s game was one of Jake Muzzin’s best:
Yeah, I think that’s one of his best games. He didn’t make many mistakes, didn’t many giveaways. He was good at moving the puck. He was good defensively. When he’s playing like that, I think we’re a pretty unstoppable pair. 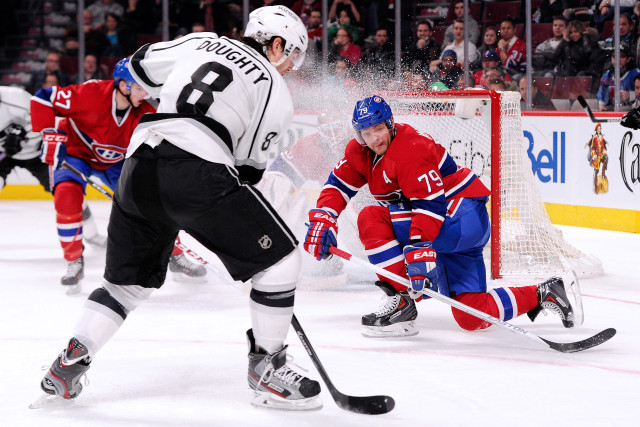