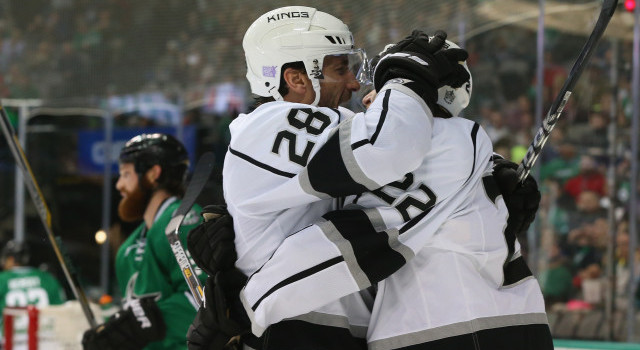 While more attention will be paid to Marian Gaborik’s return and the reunion of That 70’s Line, there’s still an interesting alignment of forwards on the Kings’ third line, which will see Jarret Stoll flanked by Dustin Brown and Trevor Lewis.

Describing their efforts as “north-south,” Lewis wants to see the line “get on the forecheck, get our hits in and hopefully cause some havoc.”

It’s easy to think of the trio as a tough-to-play-against shutdown line, given the defensive credentials embedded in Brown, Stoll and Lewis, all of whom are experienced penalty killers with awareness throughout all 200 feet of the ice.

“I think part of being good in your defensive zone is not being in there too much,” Lewis said. “So hopefully with our speed and hard work, we can get pucks in and get on the forecheck, hem them in their zone and make them tired.”

So, if you’re filling out line charts at home, there’s the Kopitar line – which will feature Marian Gaborik and Justin Williams – followed by That 70’s Line, and then the Stoll line, which will look to get in on the forecheck and cause disruptions deep in Buffalo’s end. Dwight King, Mike Richards and Jordan Nolan will also figure in prominently at even strength in another reunion – the trio was placed together immediately upon King and Nolan’s recall from AHL-Manchester in February, 2012, and combined for four points in its second game together, a February 12 win at Dallas that saw both King and Nolan notch their first career NHL goals.

As for Lewis, who is capable of slotting at all three forward positions, he’ll be back on the right side tonight.

“It’s a little different getting ready for the game knowing what your assignment is,” he said of his interchangeability between center and the wings. “But I’ve played them all for a while, so I’m kind of used to all three of them. It doesn’t really matter to me.”

It changes little, according to Darryl Sutter.

“Well, Lewie plays good wherever he plays, and he plays center, left wing or right wing, and a lot of its depended where he’s played this year once, because he was out after the first game for quite a while, and then secondly…Gabby’s been out for weeks at a time and Kopi’s missed games, so it’s mix-and-match, just about every night.”