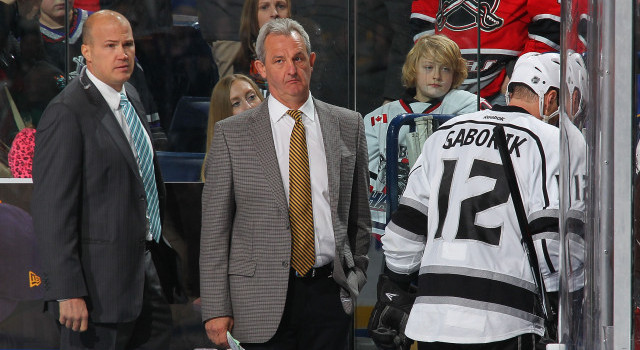 On the team’s “effort”:
It was a good effort.

On whether he was happy with the scoring chances generated:
We had some really good ones in probably the first half of the game. When you’re playing quietly against goalies that are right up there – I think they’re like 10th in the league in save percentage – you’ve got to bear down on your opportunities. I think we had some good looks in traffic and didn’t finish the job. [Reporter: It seemed in some ways a lot like the game the other day.] Yeah, there were a lot of similarities. Their defense is really good at blocking, really good at using their sticks, and they’re really good at keeping guys away from the goalie.

On Marian Gaborik’s return to the lineup:
I think his game conditioning is an issue as the game goes along, clearly.

On Robyn Regehr’s penalty:
It’s a penalty. I mean, it wasn’t late. We had one later than that. It’s a hit. You still can hit. You’re still allowed to hit, but once in a while they call it. [Reporter: The PK coverage.] It’s a bad play by Mike Richards. You can’t drop off. It’s a set play for us. You can’t drop off in the corner unless we have full control. You’ve got to cover the middle of the ice.