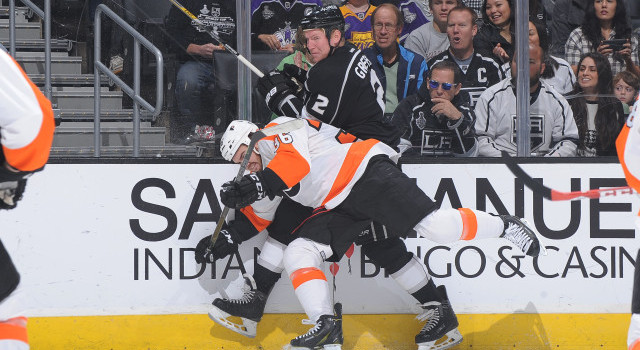 Greene, on whether there are any positives to take away from the loss:
No, I think we’re past that point with this team to take positives out of losses. You have to put up points. You have to keep pace with the division and that’s two points right there that we gave them in the first, getting down and chasing the game for the rest of the game.

Greene, on whether the first period was the difference in the game:
Spotting them two goals was the difference. Then, not being able to come back from that. That said, we have to play better defensively and get that first. The first goal is important. We’ve got to make sure we’re getting that every night.

Greene, on whether losing a game after a few wins is a natural part of the hockey season:
No, it’s on us. It’s on the players to bring it every night. That’s what you have to do. That’s our job. There is no excuse for it. You just have to do it.

Justin Williams, on whether they credit Philadelphia’s defense after outshooting them 38-16:
Listen, sometimes shots are misleading. The fact that one team has a lead and they’re trying to protect it and you’re firing all you can at the net. Do I think it was as one-sided as a 2-1 shot ratio? No, absolutely not. They had a lot of Grade-A chances and we failed to come back from a lackluster start.

Williams, on whether they were surprised by Philadelphia’s effort:
No, I know a lot of guys in that dressing room who are very proud hockey players. I’ve been on teams that are struggling and your character rises up and you won’t go away quietly. They played a good game.