Sutter: Clifford doing “a really good job for us” 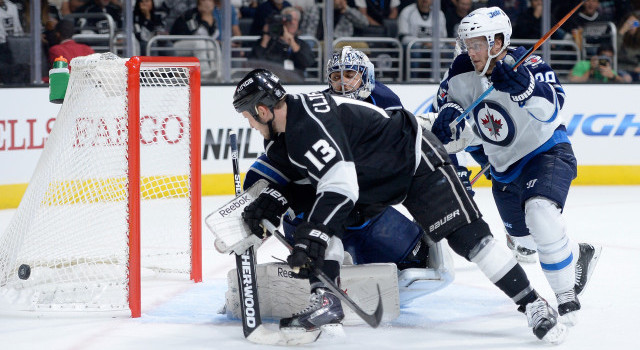 Players can be encouraged to identify their role, and Kyle Clifford, for the most part is, well, a role player. He adheres to an honest north-south game, he’s humble, he forechecks well and plays with energy and certainly is comfortable in the more rugged edges of the sport.

He’s also scoring at a higher rate than last season – or any season except for 2012-13, for that matter.

In training camp, Darryl Sutter acknowledged that “we expected more last year out of Cliffy” and noted that a strong Clifford performance over a full season could absorb some of the usage burden from the team’s top players.

Sutter is encouraged by what he’s seen from Clifford thus far. “I think he’s done a really good job for us so far,” he said.

There wasn’t anything really fancy in his 10-minute, three-second performance on Thursday; he earned a primary assist on Dustin Brown’s second goal, took two shots and was credited with a hit. But because the Kings played with the lead, and because his game has been coming along, his performance allowed Sutter to reduce the minutes of the team’s top players. No forward earned as much ice time as Brown’s 18:10, while fellow left wings Tanner Pearson (16:00) and Dwight King (14:08) also helped absorb ice time in a game in which there wasn’t a surplus of special teams time.

Clifford noted his ability on Thursday in “getting in on forechecks, going to the net, just keeping it simple.”

“Obviously there are a lot of young guys in here and we want to just build our game and improve. Nobody is ever satisfied unless you’re a guy that is 34 and reached his potential. With the young core in here, we all have to push each other and get better.”

Kyle Clifford, on the team’s scoring depth:
I think that’s something we’ve done pretty well. The power play has been pretty good as of late, so that definitely helps too.

Clifford, on whether skating on a line with Trevor Lewis at center changes his approach:
No, I think they all play similar type games. Lewie is a little more speed, energy and we’re able to get in on the forecheck and break it up. He’s always there to support you. You know where he’s going to be. It’s a north-south game for him.

Clifford, on whether last night’s game was different without post-whistle scrums:
Maybe a little different, but I think teams are trying to stay out of the penalty box and not take penalties. The after the whistle stuff doesn’t occur as much as it used to. It’s still there, but every team is trying to get an edge. If that’s not taking a penalty after the whistle, then it’s going to benefit your team.