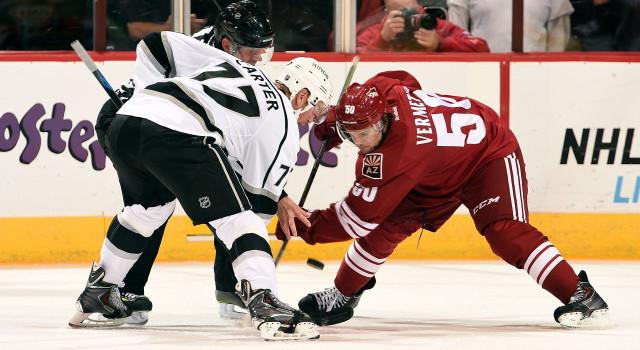 The Los Angeles Kings, who made a strong statement in their attempt to rectify their road challenges this season with a strong performance in Minnesota last week, will look to further their efforts in a building that has given them a considerable amount of recent hardship.

Since winning in Glendale, Arizona in the fourth game of the 2012-13 season, the Kings have lost five straight road games to the Coyotes – four in regulation and once earlier this season in overtime. They’ve been outscored 17-6 and haven’t allowed fewer than three goals in any game over that span.

“I think they’ve kind of penciled us in as their chief rival,” Justin Williams said. “That’s kind of the feel we get here. We haven’t been prepared for it, I don’t think. They’ve always come out hard and played us hard and a lot of times we weren’t prepared to do what we need to do to them. So, we’ll be ready.”

Opinions will vary when the term “target on their backs” is thrown around the room of a team that has won two of the last three Stanley Cups, but it does appear as though Arizona does carry some recollection of the 2012 Western Conference Final, won in five games by Los Angeles.

“I think they definitely see us as a big rival,” Drew Doughty said. “We beat them in the playoffs a couple years ago. That didn’t sit well with them. Now, every time we come in here it seems like we get their best game. That just means that we need to step up to the plate and have our best game because when we come in here, for whatever reason, we don’t do as well as we should. We know what differences we have to make and we’ll do it.”

The Kings won all three games in Glendale in 2012, stunning the white-clad home fans participating in the traditional Coyotes playoff White Out. There was, as many remember, Dustin Brown’s non-penalized open ice hit on Michael Roszival that was followed shortly by Dustin Penner’s overtime series-clinching goal.

On the subject of hits, there was also the heavy open-ice hit Jordan Nolan laid on Rostislav Klesla in the first period of the teams’ 2013-14 preseason opener. The heavy hit caused an injury, sparked a massive pile up of bodies, and led to a Paul Bissonnette suspension.

Obviously that incident fanned the flames of rivalry, right?

“I think so,” Nolan said. “I think there are a few things that happened in this arena where they deserved to call my name, I guess. But it gets me going, gets me excited for the game. I’m definitely looking forward to playing tonight.”

Darryl Sutter saw no commonality stringing together the five consecutive road losses in the series and didn’t appear to find any link between prior challenges in Glendale and what the team is looking to accomplish this season.

“We’ve only played them once this year,” he said. “I don’t know what two years had [anything to do with it]. We played them, and the score was 3-2 on a power play goal in overtime for them. So we got one point, and if we’d have done that, then we’d have gotten the other one.”

Because of the divisional schedule imbalance, the Kings will play all Pacific Division opponents five times except for the Coyotes, who they’ll play only four times. Tonight’s game is Los Angeles’ final scheduled visit to Gila River Arena this season.

Justin Williams, on whether the environment in the arena affects their play:
You have to make your own energy in this building, usually. I feel most of the time, it’s pretty good energy actually when we play. I think the fans feed off of how they play. I played in Carolina for a couple years where there wasn’t much in the stands and you’re not really focused on what’s there, anyway. You’re focused on how you have to play.

Jordan Nolan, on whether Arizona views Los Angeles as their biggest rival:
I think so. I think whenever we play these guys, the fans get into it and that’s what makes it an entertaining game. They’re always booing us and yelling our name. It should be a fun one and I’m sure Phoenix is pumped for it.

Nolan, on being a target of other teams’ discontent:
I think it’s good for our team, it’s good for their team and it’s good for myself. It gets me involved in the game a little more. It gets my blood going a little bit. Coming into this barn I know they’re going to be, not coming after me, but the fans will be egging them on I guess. It’s going to be fun.