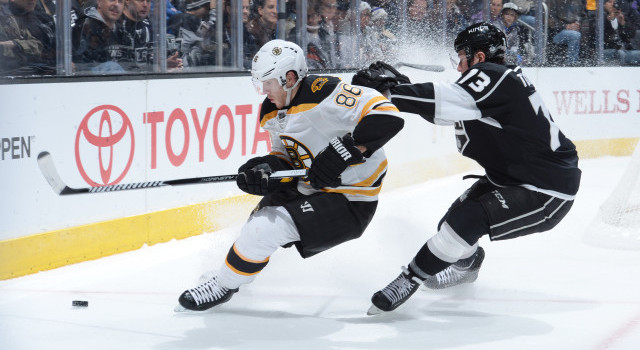 On the 2-0 win over Boston:
I think there was a little bit more detail in our game tonight than there was last game. We played the way we have to play. It’s not always the results. It’s more about the process of trying to do it right and working at it.

On the team’s ability to play with the lead:
It’s not really a new thing. I mean, we have the lead lots, and the other team has the team. That’s the way the game is.

On Anze Kopitar’s line:
They scored a goal. I think both Tanner and Tyler scored a goal tonight. I think Kopi, the line had a lot of opportunities. It’s what they have to do. [pause] Anybody want to ask about Marty?

On Alec Martinez’s performance:
First game back. When those guys, when they come back from injury, guys always have a lot of energy. I thought the pair was really good, Robyn and Marty. [Reporter: He was out there for a long time this morning. Was he just kind of testing it, or did you know he could play?] He was cleared yesterday, but I wanted to make sure still with the contact part of it. It’s still the execution part. The skill set of skating, shooting, passing for our whole team has to be there, and I think Marty was good at that tonight.

On whether he knew Jean Beliveau:
I knew him business-wise and had meetings and all that, but as a boy growing up, we got two channels – channel three and channel five – and obviously it was Toronto-Montreal, and Jean Beliveau was a classy player. Even when I was a boy, I remember him so well, just how elegant he was on the ice at everything. He was a great player and he won a lot of championships and he was a great captain. You know, we’ve had the last month with two great players in our game fighting their battles.