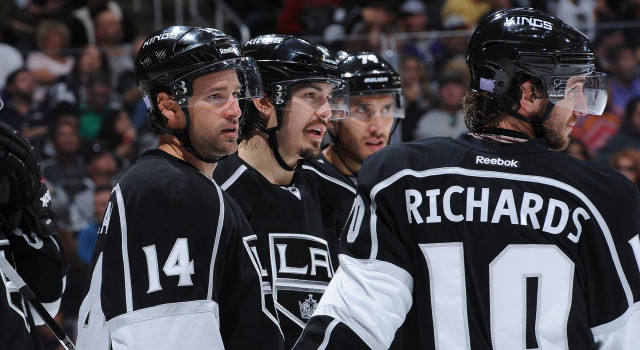 ‘Consistency’ has been a word missing from the Kings’ vernacular through much of the early part of the 2014-15 season.

No, times are not dire. Los Angeles is on pace for 99 points this season, one point off last year’s 100-point regular season campaign that was punctuated with a Stanley Cup tour. They’re only five points behind the six teams that share the NHL lead in points with 34. And considering the Kings are where they are given that Anze Kopitar is averaging less than a half a point per game after having led the club in scoring for seven straight seasons, and with Marian Gaborik having played in only 63% of the team’s games, there are still areas in which improvement should be expected to naturally progress.

That said, earlier today Drew Doughty was asked how many games this season he has been satisfied with.

“I don’t really want to put a number on it just in case I’m wrong,” he answered. “I would say about half, maybe. Half of the games we’ve played well. I think we got away with some games we won where maybe we shouldn’t have won. But I also think there are a few games we lost where we played well and didn’t win. I’d say about half we’ve played well and that’s a problem. We need to play well 90, 95-percent of the games. We’d like to 100, but that’s just basically impossible.”

Not impossible: This group eventually figuring things out. They did so emphatically in 2011-12, they did so when presented with significant challenges on the back end in the lockout-shortened 2012-13 season, and they did so following February’s Olympic break, which they limped into with a .576 points percentage and exited by winning their first seven games following the league-wide shutdown.

It was a point that Dean Lombardi referenced last week when speaking with Helene Elliott and I prior to the Nashville game.

“I’ve met with some of them. We talked about this the last time,” Lombardi said. “I think there is a different dynamic in terms of them coming off the second one, but I think there’s a number of things you throw out there that only they can figure out. What you think, what I think, what the coach thinks. In the end, it doesn’t matter. The one thing about this group is they’ve proven they know how to win, and in the end, they’re going to have to figure this challenge out themselves, too. All Darryl and I can do is give ‘em suggestions on why we’re not collectively playing at the level we know we’re capable of. And it’s been over a fairly long stretch.”

The players are aware that they have not yet hit their collective best.

“If we want to be a playoff team, we want to be in the top one, two, three of the standings in our conference, we need to play well 90-percent of the games,” Doughty said. “We need everyone to play well. It’s not going to take just Kopi playing well, just Quickie, just someone on the back end to play well. It takes everyone, all six D, all four lines and both goaltenders. We’re ready to do that.”

Drew Doughty, on what the team is focusing on:
For the group, I think it’s pretty simple. We just need to be better, a better hockey team. We know the potential we have when we’re on our game. We haven’t lived up to that potential, hardly at all this season. All of us in here know what we have to do to become better individually and as a team. That’s all we’re focused on right now. We’re not happy with the way we’re playing. We know that we need to turn it around immediately. That’s our entire focus.

Doughty, on whether this season feels different compared to recent seasons:
I think it’s the same thing. We go through this way too often throughout our regular seasons. We have little lapses where we don’t play well. As the season keeps going on, we start battling near the end to get into a playoff spot and we play amazing hockey. We’re trying to fix that. We don’t want to be doing that. We want to get off to a good lead and have a lot of wins and continue it throughout the whole season. But we know we’re going to turn it around. That’s why we’re not panicking in here as players. We’re not panicking because we know the experience and the heart on this team and we know that we are going to turn it around.

Doughty, on the progression of Jake Muzzin’s game:
He’s just getting more confident. I think, when he got back from that injury, he was playing really well. He’s still playing well. I think lately he’s been a little frustrated, maybe not played his best hockey, but as a pair we haven’t played our best hockey either. We’ve got a lot better to bring. But Muzz has gotten better in every aspect of his game and a lot of it comes with confidence. I try to feed confidence to him as much as we can because when he plays that way, he’s one of the best defenseman on the entire ice and on our team. He’s a very important piece and we need him to perform up to the best of his ability.

Doughty, on whether Jake Muzzin has a tendency to get down on himself:
I don’t know if it’s him that gets down on himself. But when you’re hearing that you’re having problems doing this and that a lot from other people, eventually it’s going to take a toll on you. That’s just part of hockey. You’re going to hear a lot of things you do wrong. You don’t really hear a lot of things you do right. He just needs to battle though. We all need to battle through it together. He’ll fix it. He’s still played well. He’s just got a little bit better in him. [Reporter: You can be fueled by positive energy and negative energy too.] Some guys work well off of negative energy. Some guys don’t. I know me, myself, I’m more of a positive energy kind of guy. I like to go out there. I like to have fun. I know when I make mistakes. I don’t need to be told. I’ve played this game long enough and I know when I’ve played a good game and a bad game. We’re trying to spread positive energy across this room as much as possible. When we’re down and we’re not winning games, obviously a lot of negativity comes into our game. We need to remove that and bring in some positive energy.

Doughty, on being named the McDonalds Player of the Month:
I’ve never won it before, so that’s kind of cool. [Reporter: What do you get for that?] I get chirped by my players for it. That’s about it. Six years in the making… no, seven years. This is my seventh year.