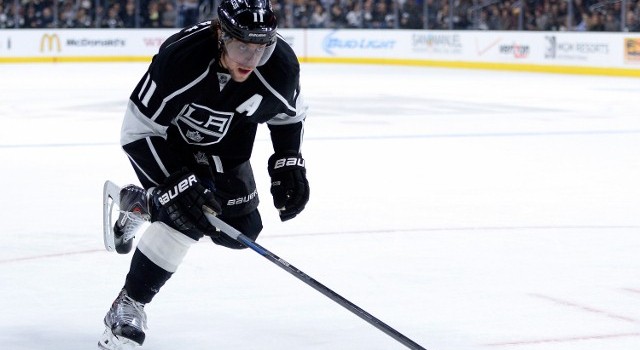 Anze Kopitar, on what the team took away from the Chicago game:
They came out strong, that’s for sure. We didn’t have the start that we wanted. I don’t think there is any secret to that. We have to have better starts. That’s the bottom line. They capitalized on the chances they had and we didn’t.

Kopitar, on whether a good start is tied to aggressiveness:
It’s not aggressive or nothing that should be outside the lines of our system and our game plan. I think the emotion and the intensity off the start have to be higher and do everything that we talk about before games.

Kopitar, on playing with Jeff Carter:
We had some good chances. He put us together mid-second [period], something like that. We had some good offensive zone time. Right now I think that’s what we’re lacking, just sustained pressure. With the quick chemistry we had going for half a game, he’s sticking with us. Now we have to build on that and get productive.

Kopitar, on their play in the second period against Chicago:
We just got into the game better than we did at the start. You hold onto the puck, you move your feet, you make plays. You do all those things, you’re going to have the puck more and you’re going to create chances because of that. Even though maybe they’re not Grade-A scoring chances, you’re in the zone, building the momentum and you’ve got to ride it. We cut it down to one and then it was a goal we gave up that in most cases we don’t give up. It was a bad line change by me. So we’ve got to look at that and clean that up.