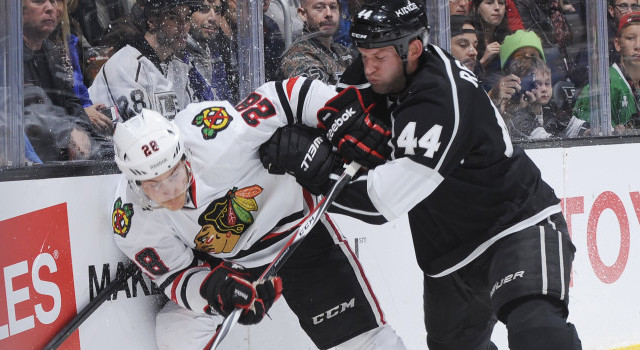 Robyn Regehr, on what Chicago did well:
A good start. They played really well right off the bat. We didn’t come out and play the way that we wanted to, and being down two-nothing after the first period is difficult. You never want to be behind after the first period, and for some reason we’ve struggled with our starts. But for us tonight, it was those first three or four shifts, especially. We didn’t do a very good job of working in our own zone and doing what we’re supposed to, and that allowed a lot of offensive zone play for Chicago, and they took advantage of that, moved the puck well and generated a lot of chances that way, so we need to be much better in that area.

Regehr, on whether turnovers led to the breakdowns:
I think we didn’t do a very good job in our own zone. I think you’ve watched us enough play that when we’re on our game and we’re competing and checking properly in our own zone that we don’t spend a lot of time there and we’re moving out of the zone cleanly and quickly. I think we can do a much better job in that area, and that’s something we’ve got to work on and get better for Boston.

Regehr, on why Chicago’s penalty kill has been so effective:
Well, you’re asking the wrong guy because I’m not on the power play. From what I saw on the bench, I thought our first [power play] was actually pretty decent. Guys were moving it around and shooting, and you want to try to reward the guys who go to the front of the net and take a little bit of the beating – the cross-checks and things like that – and I think after that, we weren’t able to generate as many shots, and I think that’s probably the biggest difference that I saw in the power play from the first one to the second and third.

Jake Muzzin, on the team’s performance:
Not good enough. A little light in the first period, and they took advantage of it. We didn’t capitalize on the chances we needed to, and that’s the game?

Muzzin, on whether Chicago looked different at all:
Well, they’re most of the same guys. They were a little hungrier than we were today. That’s about it.

Muzzin, on whether goals came off breakdowns and turnovers:
Yeah. Light plays. Not checking the right guy. They’ve got guys that’ll capitalize on it, and they did.

Muzzin, on whether the Kings were losing puck battles:
We had the puck all three goals against, pretty much. We didn’t make the play we needed to and they capitalized on it.