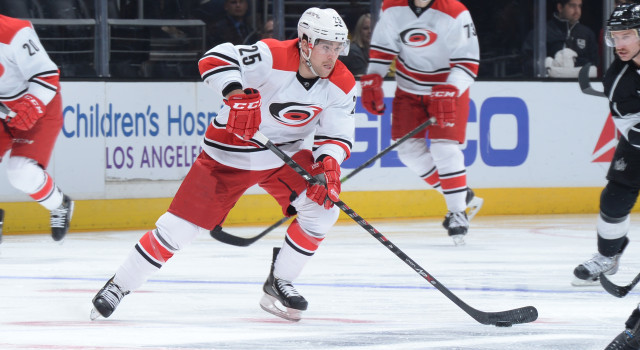 Eric Staal, on the loss:
It felt close again. It’s just they did a good job the first two periods, I thought, of getting on the forecheck and making it difficult for us to get out of our end. They were real strong, using their size and strength down low taking pucks to the net. They were rewarded with a few goals that way. The third period, we got back a little bit quicker. Their natural tendency is to sit back a little bit, so we were on the attack a little bit more and had some better chances. Close game, just not quite enough.

Staal, on Los Angeles:
They were real aggressive quick. We knew that coming in. We just needed to do a better job of creating some outs and moving the puck around. You’ve got to credit them. They were aggressive and they were in your face and they were fast. I’m sure they remember the last game we played them in our rink. Tonight, they were better and they were rewarded with the win tonight.

Brett Bellemore, on their game:
As a whole, our game plan was just to get in behind their D. I mean our forwards, we can really work them and use our speed to keep it off the walls and use their skill.

Bellemore, on defending against Los Angeles:
They come hard, obviously. They’re hitting. They’re pinning. They’re working. They’re using their bodies, obviously they’re a big team. It’s tough to contain. But as the game went on, we were back to using our speed and I think that helped a little bit.

Bellemore, on Jonathan Quick’s save on Elias Lindholm late in the game:
Obviously Quick is a great goalie. He’s a champ, right? You’ve got to go up on him and he’s pretty good down low and he had a good glove there.

Bill Peters, on defending against Los Angeles:
We had a hard time handling their size and strength on the walls. They wore us out in the D-zone. They were heavy. They were a big, heavy team in the offensive zone. We spent too much time in there tonight.