Muzzin tinkers approach to getting pucks through 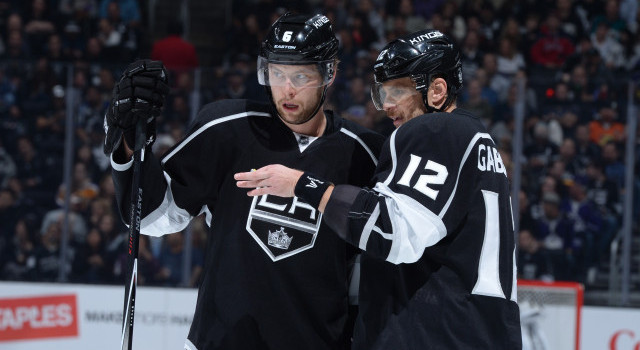 Jake Muzzin, who returned to the lineup on October 23 after missing the first six games of the season with an upper-body injury, was held without a point for the following seven games.

That first point of the season came in the shootout loss to the Islanders on November 6. Two days later, he scored his first goal as part of a two-point night against Vancouver, and two assists followed in Anaheim last Wednesday. After being held scoreless in a 2-0 loss to Dallas last Thursday, three more points came against the Ducks and Panthers as Muzzin’s six-game haul now totals eight points (1-7=8).

His most recent points – all assists – came on power play goals by Anze Kopitar, Jarret Stoll and Marian Gaborik. All three were secondary assists, but Muzzin has been happy with his distribution and ability to work the puck low on the power play.

“I mean, it’s working right now,” he said. “Moving the puck, getting some shots, we’re getting a lot of puck recoveries [and] kind of tiring out their penalty killers. The last two games, we’ve got a couple goals. Late power plays, we were moving it for a while. But with different killers, you’ve got to approach your power play differently as well. The last couple of games we’ve been moving it well and look to continue doing that.”

Muzzin led all Kings and finished tied with a game-high nine shot attempts in Tuesday’s win over Florida.

“Well, we’re using him on the power play, so he should be getting shots,” Darryl Sutter said. “I’m not concerned with ‘how many,’ I’m concerned when they don’t have any. On the back end, Robyn and Greener gave us two goals last night – that’s not going to happen that often, and good for them – but we need the other guys to be [productive]. The way you score is percentages. Look at the guys on our team up front that aren’t scoring and do it by shots. That’s why they’re not. A handful of guys have gone from hot-to-cold and that’s the biggest reason why. It’s impossible to score if you’re not around the net or don’t put pucks to the net. It’s not possible to score a goal.”

Last year, Muzzin contended with defenses that had been adjusting to his style of play and were more inclined to block his shots. This year, his emphasis is to get pucks through without necessarily trying to hit a target.

“The first couple games, it was kind of a struggle. I felt like I wasn’t seeing anything. Space was closing quickly on me,” he said. “But now, you’re seeing the play before and knowing what you have to do before you get the puck to get the puck through to the net. I think before I worried about picking a corner and stuff like that. Now, because everyone is so good at blocking shots, you’ve got to worry about getting it to the net and anything can happen – rebound, tips, screen, whatever. Worry about finding lanes and whatever you’ve got to do to find that lane. Hold it, push it, pull it.”

Jake Muzzin, on whether end boards in different arenas affect how he shoots:
You definitely take that into consideration going into the barn, checking it out. I know in Detroit there’s a very lively yellow [strip]. You could bank it off that and it would almost come right back to the blue [line], no problem. But at Staples, it’s a little more dead. Those are definitely things you take into consideration when you’re on the blue line. You talk about it before the game.

Muzzin, on whether the defensemen recording points against Florida was a “quirk’:
Yeah, I think that’s what it was last night. Guys were getting involved and we talked about being more active on the blue line, driving through and stuff like that. It just so happens, last night, everyone chipped in on the point with a goal or did something. Staying active on the blue [line], getting up in the play. Regehr’s goal, he was up in the play, up on the rush and a loose puck kind of squirted to him. Greener’s goal, he was driving through and he just kind of read the play and went the net. Everyone is chipping in and it’s good.

Muzzin, on whether offense from defensemen can alleviate pressure on the forwards:
I don’t think they really expect all of us to produce ever game like that. But it helps when you get production from everyone. Hockey is a team sport and you need everyone to produce. Some nights it’s going to be some guys and some nights it’s going to be other guys. Last night, it was the D that – we didn’t step up – we produced some offense. For sure it will take some pressure off when other people are stepping up. At the end of the day, everyone wants to win. If you’re not producing numbers or what not, you’re doing something productive for the team, then you’re helping us win. That’s what we need.

Darryl Sutter, on how unusual it is to have all defensemen record points in one game:
It was probably unusual. I don’t know how many games ago our defense hadn’t scored a goal. I think there were only two or three teams in the league. I forget which game it was we were going into that we talked about that, and since then, I think Marty was the first one, wasn’t he? And then everybody except Brayden and Slava and Jamie now have.