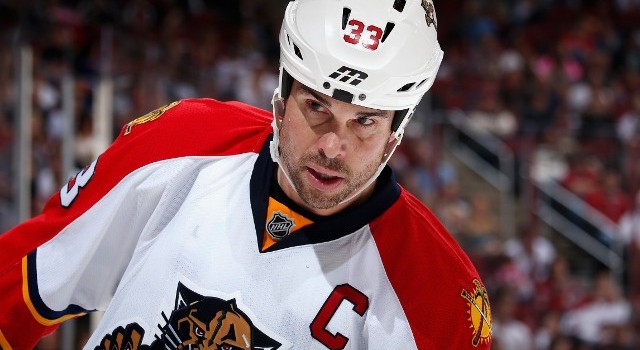 Similar to the chats he held with Brad Richardson, Jonathan Bernier, Dustin Penner, and Rob Scuderi, Darryl Sutter will find Willie Mitchell at some point in the Staples Center or Toyota Sports Center underbelly, and he’ll share a word with a member of the most recent Kings alumni class.

“I try and make a point of it, for sure,” Sutter said. “There are several players around the league now, when you look at it.”

But Mitchell, the only 2012 and 2014 Cup-winner on an opposing National Hockey League roster, is the rarest of Kings alumni. His success in the organization is so fresh that he’ll actually be receiving his championship ring shortly before game time.

“Yeah, I’m looking forward to it,” he said. “Quickie already spoiled my party though. I was trying not to look [at the ring] and I got a text one day and I’m like ‘Oh, Quickie.’ It’s like a video and it’s the crown and I’m like ‘You ass.’ He’s like, ‘Oh, sorry buddy.’ So I know what it looks like a little bit. But I didn’t really look long. That’ll be awesome and just kind of like the whole process. These guys, they had it ahead of me obviously, but it’s a reflection. The banner goes up, I watched that game. I’ll get it and it’ll just be like a reflection. It’ll be fun. It’ll be really cool.”

As would be expected for the return of one of the more vocal presences and experienced figures around the team’s parts, there will probably be a moment shared with the teammates with whom he played four seasons. In 209 games with the Kings, Mitchell totaled 11 goals, 46 points, and two Stanley Cups as a reliable and comforting presence as a 20-minute a night stay-at-home defender capable of playing against the other team’s top players.

“It’ll be good to see him. He used to be my stallmate here,” Drew Doughty said. “I miss him of course. He’s a great guy, good friend of mine. He’s a lot of fun. He was always able to put a smile on my face, that’s for sure. He had, every day, something new he came in with that just made me laugh. I miss that guy and he’s a great player. I’m fortunate enough to play with him for a few years and we miss him here.”

As for during the game, there may also be a word or two exchanged.

“Oh, for sure there will be some during warm-up. I’m going to have a tough time not smiling the whole game because I know how Drew is going to be. There will be lots of stuff going on,” Mitchell said. “No cutting deals.”

Without saying as much, Doughty acknowledged the potential to share a few hellos.

“Oh yeah, he’s full of chirps. I’m full of chirps,” Doughty said. “We’ll be bickering back and forth I’m sure, as will everyone else on the team. Obviously the number one thing, we want to beat them and we have to beat them. That’s just how it goes.”

As far as speaking goes, Mitchell’s corner perch near the entrance of the team’s dressing room in El Segundo has been ceded to Robyn Regehr, who had occupied the spot during the 2012-13 season that Mitchell missed due to knee trouble. Is it a given that the team’s elder statesmen sits in that position in the room?

“I don’t think it defaults to the oldest guy because last year he was back here and he sat back here in his old stall. So we’re just kind of flip flopping I guess,” Regehr said. “This is my second go around here. I don’t know. I don’t really like it that much though because I have to sit too close to the forwards over here.”

So it will be a nostalgic day for Mitchell, one in which the need to capture two points outweighs the firmly appreciated but secondary pageantry associated with his return. It should make for a surreal moment of his well established gameday routine when he returns to the bench during warm-ups to take in the surroundings and the moment in the arena.

“Yeah, I’ve always done that in my career. I’ll probably give some time for reflection there,” Mitchell said. “We weren’t here forever. We were only here four years, but heck the four years were so great to me and my family. We met so many great people here. We really, really enjoyed LA. We didn’t have a clue when we came and I was kind of a small town kid. But we didn’t have any little idea of how much we’d like it. I’ve really grown to like LA and we have a lot of friends. We’re kind of west coasters, me and my wife, so it’s nice to be back.” 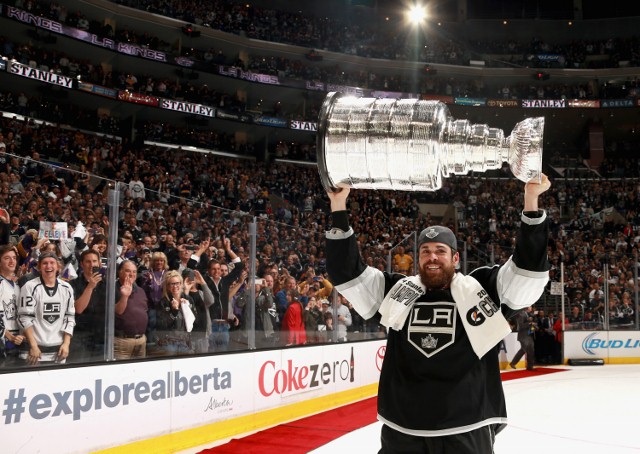 Willie Mitchell, on being a Florida Panther: 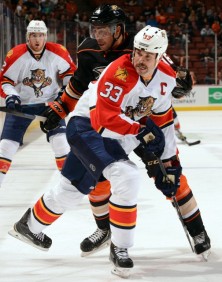 It’s been great. It’s been awesome. Being completely honest, I didn’t know a ton about the organization, didn’t know any players except Roberto, playing with him in Vancouver. There is new ownership and kind of new coaches and all that. It’s been really good. Being completely honest, it’s tough going from, in your mind, a team that just won a Stanley Cup and then all the sudden you’re going to a team that was one of the weaker teams in the East. I felt like it was the right place, the right opportunity and the right fit. The same thing I did when I came here in 2010, was that the teams that were interested in me I tried to find the right fit. I felt it was the right fit. They need a player like me and I felt that it was a good young team. So far, we’ve done OK. We’re beating some good teams, learning how to kind of play the right way and do things and have our young guys grow into their own. It’s been a lot of fun. It’s been different. [In Los Angeles] it was a team where I’d just go out and play and we had a lot of leadership. [In Florida] I’m kind of a more leadership role and so you kind of take on that responsibility which is a little bit different. I’ve done it earlier in my career. But when I was here in LA, I could kind of just sit in the weeds…because there were so many great leaders on the team. But it’s been fun. It’s been a really good transition so far.

Mitchell, on his relationship with Aaron Ekblad:
I think he’s like a Drew, but obviously earlier in the process. He’s 18 and he’s so talented, so you don’t really have to say too much. To be honest, he’s a really, really mature kid, like really, really mature. He doesn’t look 18, doesn’t act 18. It’s been good. We’ve had a good relationship. Me and my wife couldn’t have kids, so we took on an 18 year old kid. So he’s living with us this year too. It’s fun and he’s going to drive me right now down to Manhattan Beach. It’s perfect, right? 18. You always have a driver if you have a glass of wine. This was the sale on it. It’s been good. It’s been great. Like I said, he’s really mature. Seriously, he’s a good kid and an excellent player. He’s got a lot, a lot of skill and maybe it’s more about just teaching him those things that you learned from great coaches, players, peers you’ve played with and hopefully picked up to help him. When you’re young, you always want to accomplish everything. I talk about Drew. I played with him all the time. I talk about how Drew, even though he’s all-world offensively, there is games when he’s playing against an Anaheim he’s not trying to put up points. He’s actually just trying to keep Perry and Getzlaf off the board and knowing when to do and when not to do it and those things that we all didn’t know at 18. I’m just trying to help out with that, and like I said, he’s a great player. He’s had a great start. I think he’s our leading scorer as a defenseman. That’s been fun. That’s the kind of challenge I like to take on and it’s part of going forward. [Reporter: Drew just last week had great battles with Jamie Benn.] Yeah, it shows. Look at what’s hanging over Staples, right? You need to play good defense to win. You can have as much skill in the world, but if you don’t play good D, you don’t win. It’s been good. It’s been different this year, just a different challenge. It’s really fun because the organization’s new ownership. There is a sense of ‘Ok, we added some players and it’s turning.’ And so far, it has. We’re keeping our goals against pretty down. We’re not scoring a lot, but we’ve put some good wins on the board this year against some really good teams. So you can kind of sense that the young guys start to believe. And it was the same thing here, right? You had great players and it was believing how great you were. We still have work to do, but you can start to see the growth and that’s fun to be a part of something like that when you see something grow. Like I said, it’s the same thing that happened here. Hopefully, I’ll be a big part of that and keep going with it. It’s been fun.

Mitchell, on what it will be like to play against the Kings:
I think you speak to what the organization does well and what we can learn off of a great team like that. How they compete. How they battle, the preparation, all those things. I guess the only thing you do, is advice as a player, let them know what that team is capable of. How hard they compete. Why they’re great. Why they’ve won two Stanley Cups and what we have to do to just have a chance against a great team like that. It’ll be fun. It’ll be a lot of fun. I’m looking forward to it.

Drew Doughty, on whether it will be difficult to “chirp” Mitchell with a straight face:
Yeah he’s an opponent and we have to play it that way. I’m sure once in a while there will be jokes thrown around when players are playing each other. It’s a game and our coaching staff doesn’t really want that to be happening, going around joking around out there. It’s game time and you have to put your game face on and play the game to the best of your ability, the hardest you can play it. That’s how we’re going to approach it.

Robyn Regehr, on what he anticipates when playing Willie Mitchell:
What’s it going to be like playing against him? I think it’s going to be a lot of fun. Guys really enjoyed watching him warm up his edges, as he called it, in the warmups and in between the TV timeouts and things like that. He’s always out there flying around. So I’m sure we’re going to have a little fun with that. We’ll, I’m sure, talk about some sustainable fish farming and all the other things that he enlightened us about when he was here. I think it’ll be good. We played a much better game against Anaheim overall. It was nice to win, but I think just our game in general was better. More solid, closer to what we need to play throughout the season here. So I think it was really positive in that type of way. So we need to build on that. That being said, Florida came off a huge win for them in a tough building to play in in Anaheim. And a big win, 6-2, so they’re going to have some confidence and it should be a good game. 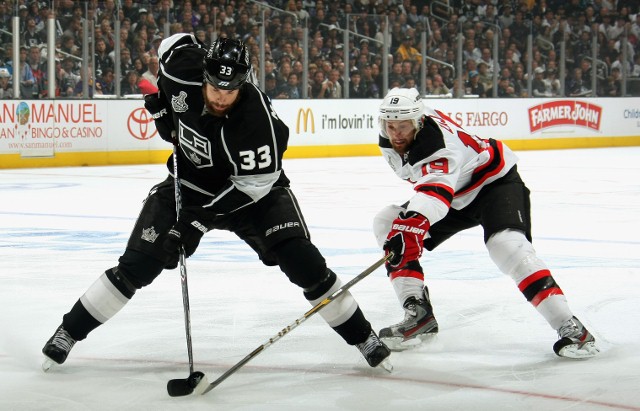