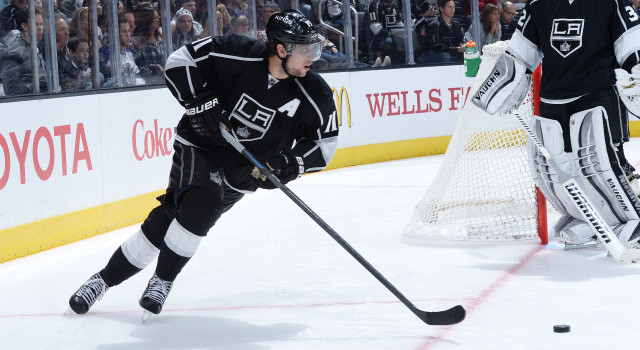 Anze Kopitar, on the power play:
I guess even if you look in the past, we’re not the best power play team. But it seems like we usually pull everything together when we need it and tonight we certainly needed it. We moved it around quite well. In the end, I guess I was able to get a pretty open look. I just wanted to put it on net, I guess the top part of the net, and it went in. I think it was good movement by everybody and obviously it turned out good.

Kopitar, on the difference between today’s game and Wednesday’s game:
We’re not used to giving up that many shots. We take pride obviously in our defensive game and that was certainly the game that is not a textbook game. I thought tonight we came out with a little physicality. The guys were hitting people. The physical presence was definitely there and tightened it up defensively. That’s what we need to do.

Kopitar, on whether they felt like they needed to win this game:
It was big for us. The power play in OT, we wanted to finish it off. We had some decent looks, but we just couldn’t finish it off. So it was nice just to see Stolly finish it and get on the board himself too. We’ll definitely take two points, but we know there is still some work left to be done. We have to improve on this.

Kopitar, on Darryl Sutter’s focus on the timeliness of power play goals and penalty kills:
He says that to us. He does throw it out there and obviously you want to score as many power play goals as you can. But sometimes it is the timing of it and tonight was definitely good timing.

Jarret Stoll, on the victory:
We came out and we were physical. We were getting pucks in deep and there were points that we needed to be a little better, but Quickie came up big when we needed him to again. Some big penalty kills and a big power play goal in the third, I think everyone can attest to how well they moved the puck around and basically almost two minutes in their zone and came up with a big goal.

Stoll, on their special teams play:
The power play, first of all, they were moving it. They were getting loose pucks. If you shoot the puck, you can’t find those loose pucks. Usually you’re down the ice breaking out. Our penalty kill just kept it simple, kept it hard and blocked some shots, good lanes, good sticks. Any PK, you need a good goaltender to make some saves. So we had all that.

Stoll, on whether he is relieved to score his first goal of the season:
Yeah, it feels great. It’s been a while. Trying hard, but yeah it feels great to get that goal and just to get the two points. We needed two points bad, especially against these guys and Tyler Toffoli just came out there shorthanded and he finds a way to score goals. Either way he finds a way to score goals. I think that’s four on the season for him, so pretty special.

Stoll, on whether they wore Anaheim down in the third period:
I think we pushed a little harder. Our last game we’re down 2-0 and at home here in the third period, we didn’t have a push at all. Tonight we had a push. We probably knew we were getting a power play in the third period if we played the right way. We got it and the guys did a heck of a job on that power play to tie the game, big moment in the game there. Got it to overtime and got the win.

Stoll, on his overtime goal:
Just going to the net and Justin Williams made a great play driving wide and getting the puck to the net. I just got a stick on it. I tried to keep my stick on the ice. Just going to the net, a lot of times our team doesn’t score the pretty goals. We grind it out and lucky to get that one.