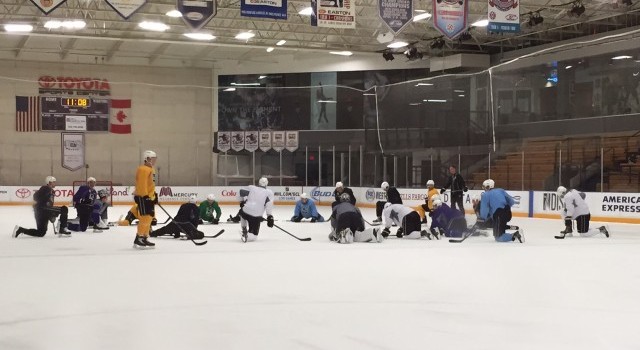 The Kings took the ice for a short practice at Toyota Sports Center on Friday, their one non-game day during a three-in-four stretch that culminates Saturday afternoon against Anaheim at Staples Center.

-The notable changes include Jeff Carter moving from center to right wing and loading up alongside Marian Gaborik and Anze Kopitar. Darryl didn’t speak specifically on the changes, other than to say, “We just did some different stuff today. Not really line stuff.” As recently as last night, he spoke about the need to get consistent production out of the team’s top players.

-Robyn Regehr skated alongside Jamie McBain and could return to the lineup for tomorrow’s matinee. Having been injured when getting tangled up in the last shift of overtime against the Islanders two Thursdays ago, Regehr equated the length of the absence to that of the All-Star Break. Though he’s still encouraged by his progress, he still has to chat with “the boss,”

“It was only an ‘undisclosed’ injury. Those ones are usually pretty quick,” he joked.

-Alec Martinez didn’t skate at practice today. I’ll have an update on his status shortly.

-Jonathan Quick left the ice first and should be expected to draw the start against the Ducks tomorrow.