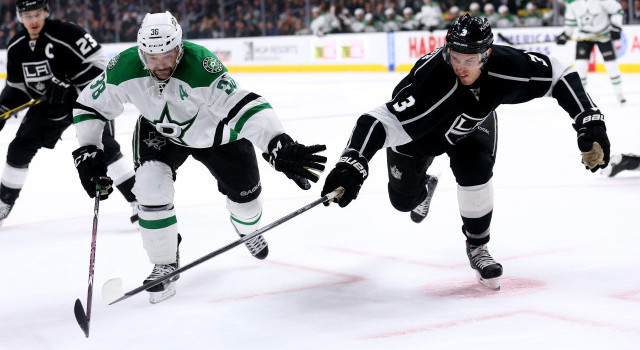 On the 2-0 loss to Dallas:
I thought we fought hard and couldn’t come up with the goal to tie it or cut it in half. [Reporter: When you look back, though, that one big save on Stoll probably could’ve been the difference.] Well, that’d cut it in half.

On generating more chances offensively:
Some nights you’re going to get a lot, some night’s you’re not. We scored 10 goals the last two games coming in to tonight, so tonight we couldn’t get one. We need a little bit more from the top end, always. When you’re banged up in the back, you’re going to look at chances from your top end players or what they give you in the tough areas of the ice.

On Jamie McBain’s performance in his second game compared to his first:
Didn’t play much tonight.

On the team’s energy level:
I thought early we were sluggish, and I thought we got better as the game went on.

On whether last night’s physical play affected tonight’s game:
Last night was not a very physical game. I thought that we were not part of that last night. I said that after the game. It shouldn’t have had any impact on us tonight at all.

On Drew Doughty logging 31:39 of ice time:
He has been playing a lot of minutes. Do we like that? No. But that’s where we’re at. You know what? I look at that all the time, too. It’s too many minutes. He’s going to tell you he’s fine with it, but over the long haul, that’s too many. [Reporter: Is it one of those things where you just want the best guy out there as much as possible and deal with it later?] No. We’ve gone with five and six and tonight back to five again. It’s got to get back to it somewhere. As I said, he’s probably three or four there, and then everybody else is three or four more, too. It’s like I tell them, ‘You know what? You’ve got to play a little bit more and a little bit better.’ Not easy.

On facing Anaheim on Saturday:
I look forward to it. They’re a really good hockey club, so they’re in a good position right now.