Down on the farm: Rob Blake on the Monarchs 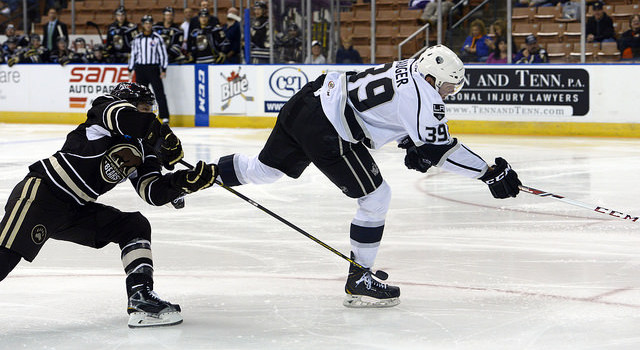 Kings hockey operations have been encouraged by the early play of the Manchester Monarchs, who have jumped out to a 7-4-0 record after recording wins at Springfield on Saturday and at Portland last night on the back of J.F. Berube’s 19-save shutout.

Scoring in the win over Portland was 6-foot-7 rookie Justin Auger, who has continued the impressive strides he displayed at training camp under the team’s development program. Auger, who had to fight for recognition on a loaded Guelph Storm team that reached the Memorial Cup Final a season ago, now has two goals, three points, 15 penalty minutes and an even plus/minus rating through his first 11 AHL games.

Assistant General Manager Rob Blake, who has been in Manchester with other members of the club’s hockey operations, also serves as the Monarchs’ General Manager and noted that Auger has been a “pleasant surprise” in his early professional career despite being “one we weren’t sure we were ready to make pro.”

“He could’ve gone back to junior,” Blake said. “He’s fit in there not as offensive, point-wise, but he fits right in there on that line and he does his job. He looks like a pro because he’s so big and he gets up and down the wing. He’s almost better in a structured system, because he didn’t play a lot in junior last year.”

Auger, who has appeared opposite both Michael Mersch and Brian O’Neill on Nick Shore’s line, has been strong on the boards with the puck. Could there be any similarities between him and Dwight King?

“They’re big, but they have good hands, too. He’s real good now of getting in, getting the puck,” Blake said. “Now we’ve got to get him to make plays with it, where Kinger…is really good on the half wall. Our own D-zone, when he gets the puck, he makes plays. Augie will get to that. But he’s been a good surprise down there.”

Fresh off his first full professional season, defenseman Derek Forbort has refined both the on-ice and more intangible areas of his game. His work with the development team has greatly improved his skating, and now many of the cerebral aspects of playing 70-plus games in a season are solidifying in the 22-year-old who was selected 15th overall in 2010.

“Forbort’s been much more assertive than he had been in the past,” Blake said. “A lot of us noticed the weekend we went in there for the development, you noticed a little different atmosphere around him when you see him – like in practice, in talking. And from what I’ve heard, he’s come a long way from first when he wouldn’t look guys in their eye, he wouldn’t do all that. But now you could see that he’s got a year under him, and it makes a difference there.”

Through 11 games, Forbort has two assists and a plus-one rating.

Among other notables from the Kings’ top farm club include Nick Shore and Jordan Weal, which shouldn’t come entirely as any surprise.

“Those two have been real good for us,” Blake said.

“Nic Dowd, he’s done his job at center. They all played pretty well. [Kevin] Gravel’s made his way back in that lineup. He was kind of in and out. He’s a solid player.”

Defenseman Kevin Raine, who played in Los Angeles’ preseason win over Anaheim at Staples Center, has seen time as a forward because of numbers relating to an forward/defensemen balance. The move doesn’t come exactly under the same circumstances as the one that led to former Kings prospect Nic Deslauriers moving up front last year, but it’s certainly worth mentioning.

“I started laughing, I said, ‘You guys did it with Deslauriers last year, and he’s in the NHL, so now you’ve got to do it this way,’” Blake joked.

Also on defense: Andrew Bodnarchuk, who injured a knee during training camp at Staples Center, has been skating on his own and has not yet been cleared for contact. It’s rough timing for Bodnarchuk, who earns a minimum league salary and has five NHL games to his name. Though the Kings signed Jamie McBain yesterday, Bodnarchuk would have been under consideration for a recall had he been healthy.