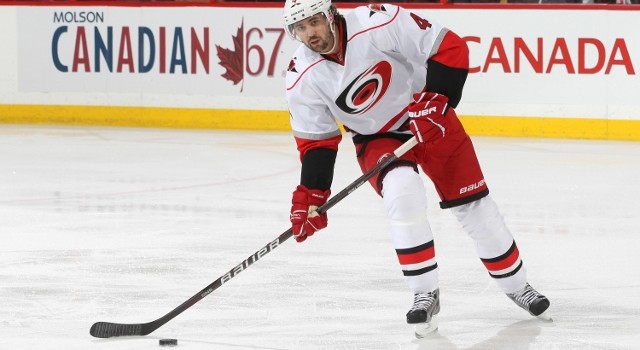 Jamie McBain has a locker, a number, and took part in today’s practice, and courtesy of this report from Lisa Dillman of the LA Times, will soon be a King for the league-minimum salary of $550,000. Earlier today the Kings had been mulling their options in the wake of personnel issues that caused them to use only five defensemen during Saturday’s 5-1 win over Vancouver; the preferred option now includes bringing McBain under contract.

McBain will wear number five with the Kings.

“I know that they’ve got some guys that are banged up a little bit, so I’m just here to kind of skate here for these next few days, and once game days come along we’ll see where guys are at. But I’m just excited to be here and just to be around these guys and kind of see where things go,” he said.

The “banged-up” players he’s referencing are Robyn Regehr and Slava Voynov. Regehr, who didn’t practice today, is out with an undisclosed injury that will sideline him for a ballpark of roughly seven-to-10 days, Kings General Manager Dean Lombardi told LA Kings Insider earlier today. Voynov, who has been suspended indefinitely following an October arrest on suspicion of domestic violence, skated today with Associate Head Coach John Stevens as he waits to hear whether or not the district attorney plans on pressing charges – a decision that could come early this week.

The Kings don’t have a roster spot available for McBain at the moment. The team has not decided whether Robyn Regehr’s injury will necessitate a stay on injured reserve, which could open up a spot. But because McBain is a right-shooting defensemen, the length of his future with the Kings could be more closely tied to any Voynov developments that emerge this week.

It’s a bit of uncharted territory in this unprecedented situation for the Kings, which evolved with a 5-1 win over Vancouver on Saturday that was noted by Darryl Sutter as “the first time ever that I’ve dressed five defensemen.” Los Angeles was $160 short of the cap space necessary to recall a defenseman from Manchester and instead worked with an askew 13 forwards / five defensemen ratio.

“I’ve been on a team that’s dressed only five defensemen, so to be able to come away with a win is unique,” Sutter said.

Also unclear is what to expect from McBain, who has practiced with the team only once. Though Darryl Sutter has seen video of the defender, he also noted on the most recent road trip that “if you don’t watch somebody live, you’re not an expert.”

“[I] have seen very little of him live being in the other conference,” Sutter said Monday. “Probably two or three games, that’d be it. Saw him in training camp [with Arizona].”

Though McBain referenced some adjustment in systems play – “It’s definitely a lot more structured, in a sense,” he said – Sutter downplayed any major change for the young defenseman.

“Yeah, it’s not that big a change in systems anywhere, I don’t think,” he said.

Do the Kings utilize any different approach to what McBain may have experienced in the past?

“He’s played on two teams. Couldn’t tell you,” Sutter said. “I’d say the difference would be being a better team.”

Having attended training camp in Arizona on PTO and weighing a KHL option, McBain returned to Edina, Minnesota, where his father owns a rink and runs a well-established training academy.

“Yeah, I was just on my own, basically, but I was back in Minnesota, where I’m from,” he said. “I was just skating there mostly by myself. There were a few guys around still, a few buddies, men’s leagues and things like that. Just kind of keep my feet going and training by myself and just kind of waiting for that right opportunity to come along.”

Jamie McBain, on joining Manchester, and now Los Angeles:
Made the trip down to Manchester there for the PTO and got five games under my belt. I was on a plane yesterday to come here. It’s been kind of a crazy few weeks here, but I’m just excited to be here.

McBain, on the report that he had signed with KHL-Omsk:
There were some options that I was looking at over there. But nothing ended up falling through with that. Nothing just made sense for me, so again, I was just kind of back at home, training, waiting for that right call.

McBain, on whether the past month has been surreal:
Yeah, it is. It’s kind of been a crazy summer in a sense, I mean just kind of bouncing around, going to Arizona camp, leaving there, not knowing where to go, and coming to Manchester and getting this opportunity, so it’s kind of been definitely a crazy few weeks. But again, I’m just excited to be here and look forward to the opportunity.

McBain, on how he felt playing in Manchester:
Good. It was really good, just kind of getting back in game shape and things like that. I hadn’t played in a bout a month since Arizona camp, so it was nice just to be around a team again, be around a group of guys back in a locker room setting and to get some games under my belt and get my feet going again.

McBain, on whether it’s fair to call him a “puck-moving defenseman”:
Yeah, I mean, that’s what I’ve been known for through my career [and] it’s something I definitely take a lot of pride in, being a guy who can get back for pucks and make a good first pass, get the pucks up the ice to the forwards and let them do their thing, and as well kind of get up the ice and be a good offensive threat, too, maybe joining the rush and give the guys some options there. But definitely a puck-moving defenseman. Just to get the puck up to the forwards and give them a chance to do what they do.

McBain, on the Kings’ systems compared to previous systems he had known:
It’s definitely different. It’s definitely a lot more structured, in a sense. I think on the other teams I’ve been on, it’s been a little bit more, I guess, just aggressive, and things like that. So this one definitely is a lot more structured. It’s a five-guy system where in a sense it’s a lot easier as a D-man, I’ve noticed, being down in Manchester playing the system. You just kind of play your areas. You let guys come to you, and it makes the game so much easier when you’re working as a five-=man group and you get pucks, control pucks. It’s going to be a fun game to play.

McBain, on whether the Wisconsin Badgers will return to the Rose Bowl:
I hope so. The way things are looking, we’ll see.