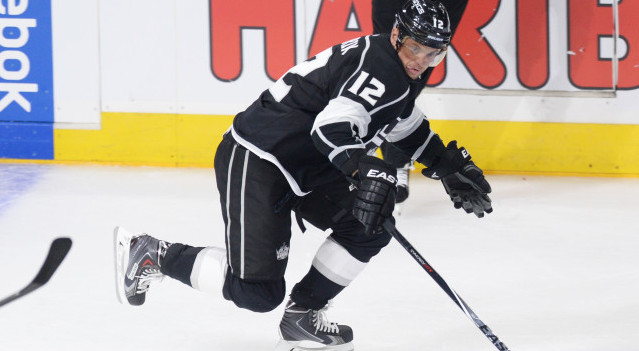 Nothing tangible was produced, but the Kings’ opening first period shift of their 3-1 win over Dallas on Tuesday might have been the best shift Anze Kopitar and Marian Gaborik had produced in their limited time together in 2014-15.

“I think we did what we wanted to do,” Gaborik said Thursday. “We got some zone time, a couple chances, a couple shots on net and it’s important to have that good shift for each line to get some swagger, some confidence. Just go from there.”

Though the Kings ultimately fell behind 1-0 several shifts later, the zone time continued throughout the game. Williams, Kopitar and Gaborik were all in the black Corsi-wise despite seeing a heavy amount of time against several of Dallas’ elite offensive units.

Though Gaborik is stuck on one assist in five games this season after missing eight games due to an upper-body injury (and all but one preseason game), Sutter said that he “had some really good looks” against the Stars.

“If he’s sharper, he probably scores on a couple of them,” Sutter said Tuesday night. “It’s the way it goes.”

The gradual improvement in comfort that naturally follows an injury was accelerated in the Dallas game according to Gaborik, who said that there was “a big difference” in his timing when compared to earlier games.

“I felt really good out there,” he said. “The timing and everything is important to find. Made a step in the right direction and just keep elevating.”

There will be further adjustments tonight, as his linemate Williams is out with a facial laceration. Though Jordan Nolan saw time alongside Kopitar and Gaborik at this morning’s skate, it wouldn’t be a shock to see Dustin Brown in that right wing spot at some point against the Islanders.

“We’re used to that, if it’s Brownie or Willie,” Gaborik said. “Obviously Willie likes to dangle more in the offensive zone, like around the walls and stuff. Brownie is a more straight ahead guy. We’ve had success before with any of those guys. Whoever is there, we just need to make sure we’re on top of our game.”

Brown, on the other hand, notices “little things” in his role evolve when he skates with Kopitar as opposed to other centers.

“When I’m playing with Kopi, it’s maybe get to the net and open up space for him, whereas when I’m playing with Stolly, Stolly generally likes to give me the puck and then do that himself,” Brown said. “I’ve just made a conscious effort to hold onto pucks more. Sometimes it gets me in trouble because I hold onto it too long. But again, it’s about trying to find new ways to have an impact on the game.”

Regardless of the alignment, the Kings will be challenged by a New York team that defeated Anaheim in overtime last night, though to be fair, neither Ryan Getzlaf nor Corey Perry were in the lineup. The Islanders are 1-2-0 on a five-game western swing that concludes Saturday at Arizona and are 7-5-0 overall.

“The Islanders won yesterday, a big game for them,” Gaborik said. “They have a lot of talent. They traded for two key defensemen. They’re a good team and we need to be ready.”

Marian Gaborik, on the Islanders’ highly skilled forwards:
Those are hard, talented guys where you really need to be aware of where they are at when you’re out there against them. Obviously their power play, I remember, has been consistent. It’s always been very good. I don’t know their stats right now, but I’m sure it’s up there. Just the same old story that we’ve been talking about, just to try and eliminate penalties and we just need to get our power play going and get to basics. Get shots on net and get some ugly ones.