Sutter on a “forceful” Brown; #fancystats trending up 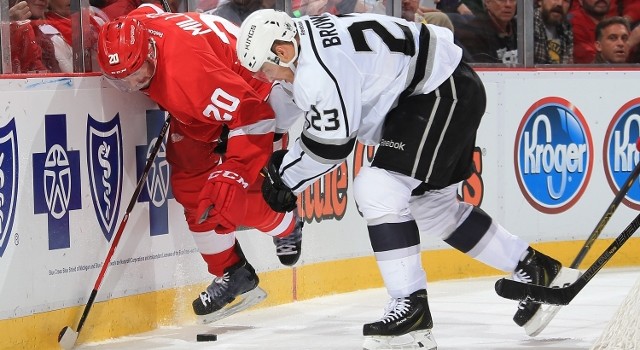 Dustin Brown has been among the finest possession-driving forwards on one of the league’s elite possession driving teams. With a Corsi-for percentage of at least 55% in each of the last three seasons, Brown’s rate of possession was well in the black even when compared to his teammates.

This year, however, only 46.9% of shot attempts have been directed towards the attacking net while Brown has been on the ice in five-on-five situations. It’s an anomalous percentage affected by a small sample size as well as some uneven team play early in the season. Brown, too, for what it’s worth, has in the past referenced a tendency to start slowly.

But Brown’s play was one of the bright aspects of the recent road trip, which culminated with his game-winning goal in Dallas on Tuesday. Asked about his play earlier today, Darryl Sutter said that “I think the last two or three games of the trip we’ve seen more of Dustin Brown, not because he’s scored but a little bit more of that forceful game that we need out of him.”

“The question…gets asked often about Brownie, but Brownie’s had success by playing a very certain way, and that’s how he has to play,” Sutter continued. “When he gets away from…playing a straight line game, then he struggles. When he’s on that straight line game and being a forecheck guy and a really good penalty killer for us, then he’s really effective.”

That “straight line game” was noticeable in Detroit. He earned a shorthanded penalty shot with his effort against the Red Wings, which was followed by a game in Carolina in which he generated the most controlled and successful zone entries. No player’s entries led to as many shots on goal as Brown’s zone entries in the Hurricanes game. He then scored the game-winning goal in Dallas to finish off the road trip.

Though he was in the red possession-wise during even strength play in the Dallas game, he finished with positive Corsi numbers overall on the road trip, highlighted by a 70.4% even strength Corsi-for rating against Pittsburgh. As a whole, he generally helped drive possession, not inhibit it, over the last five games.

Overall, he has two goals and a minus-three rating in 13 games.

“I mean my stats this year aren’t very good, but I feel like I’ve played better hockey the first 13 games or whatever than all of last year,” Brown said. “It’s just holding onto pucks, making better plays when I have the puck. The physical aspect, I think that’s kind of like an evolution. Everyone remembers when I was 22, 23. We weren’t a very good team and as a result I ran around and hit guys. They were big hits and everyone remembers them. Now we have the puck a lot more and we control the game a different way than we did back then. Like I said, for me, I feel like I’m moving a lot better this year than I did probably in the last two years.”

Dustin Brown, on whether his better movement on the ice is a result of fewer injuries:
That’s part of it, but it’s also just as you get older you find that your body doesn’t work as well. I changed stuff up this summer. Again, my mobility, I feel like I’m moving much better, much quicker. [Reporter: Did you train differently?] Yeah, I just did a few different things for my hips and stuff like that. Like I said, the stats come with just staying with it.

Brown, on being a two-time Stanley Cup champion at 30 years-old:
You try to put it in perspective, but in the day to day you really don’t look at the big picture. I still just come to the rink every day and try to get better.

Brown, on whether which line he plays on affects his game:
I think there are just little things. When I’m playing with Kopi, it’s maybe get to the net and open up space for him. Whereas when I’m playing with Stollie, Stollie generally likes to give me the puck and then do that himself. I’ve just made a conscious effort to hold onto pucks more. Sometimes it gets me in trouble because I hold onto it too long. But again, it’s about trying to find new ways to have an impact on the game.