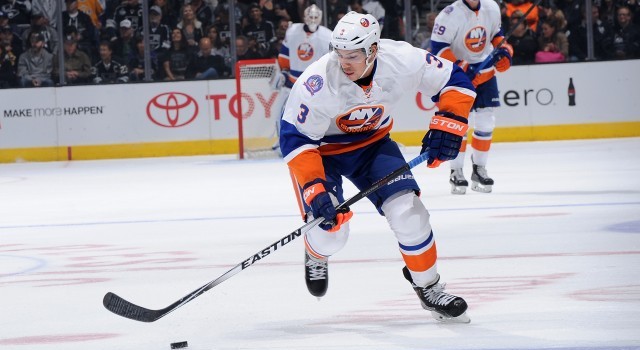 Jack Capuano, on the victory:
I think it was one of the best games we’ve played all year. We managed the puck. We just, as I told the guys, I thought we executed every aspect of the game and I thought our penalty kill was real good tonight. I mean your goaltender is going to be your best penalty killer, and I thought Chad made some big saves.

Capuano, on how the team responded to Dwight King’s goal:
There the type of team, and it’s a fluky goal, but it’s a great goal for me because they get bodies and they just throw pucks to the net. You’ve got to learn from that. We responded and we knew it was going to be a battle in here tonight. It’s a big, physical team and I thought we responded. The one thing I really liked about our team tonight is we used our speed. That’s what we talked about, we transitioned the puck really well.

Travis Hamonic, on how the team responded to Dwight King’s goal in the first period:
They came pretty hard there in the first 10 minutes and they get a lucky bounce. I thought we did a really good job of settling down and we weathered the storm there for the most part. A shinny bounce and that happens, but I thought we did a really good job in the second period pushing back. It just seemed like that first period was so fast. I don’t think there was a whistle until like six minutes left in the period and there was only two or three whistles that period. It was a fast period. I think once the second came, we got our feet under us a little bit and I think we started to generate more chances and I think tried to wear them down a little bit.

Kyle Okposo, on whether the identity of their team came through in the win:
I’ve said it all year, we’re not the same team. We went on a three-game skid and everybody wanted to hit the panic button. But in here we didn’t because we know what kind of team we have and we know we’re a good hockey club. We’re still going to get better. We’re still not there yet. We have a lot of things we can improve on, but I thought we did a great job tonight and the penalty kill definitely took a step in the right direction. They were huge for us.

Chad Johnson, on the win:
It was a good game. It was a pretty fast paced game there and I thought we played a great game. I thought we battled the whole night, blocked a lot of shots, and really stuck together, especially when they put the pressure to us a little bit. I think just to see our identity sort of come through there a little bit, and sort of fight through some adversity with killing penalties and getting those taken care of. It was a good game.