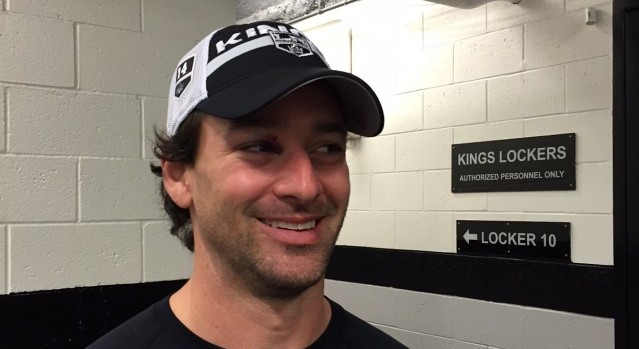 Injuries to the eye don’t sit well with Darryl Sutter.

The scenario emerged late in Tuesday’s 3-1 win at Dallas when forward Justin Williams was struck with what looked like a particularly painful high stick from Stars defenseman Brenden Dillon, who was assessed a double minor on the play. The 33-year-old Williams immediately went to the dressing room and ultimately received “a couple stitches up top on the eyelid” from contact when the stick “sliced up” near his right eye.

“He was in this morning and got checked out, so that’s good,” he said.

When asked whether he would sit tomorrow’s game out, Williams replied, “I think so, yeah…[I’ll] probably [sit] tomorrow out, yeah, and then we’ll just see how it goes.”

“I’m still blurry right now, but that’ll subside in a few days,” he said. “…I mean, initially it’s pretty scary when you get hit. It’s kind of like getting poked in the eye. You can’t see anything for a little bit. It scares you, and then the doctor tells you you’re going to be fine, and you’re OK.”

Should Williams not be able to play tomorrow against the New York Islanders, his consecutive games played streak – currently the longest on the team – would end at 225 games. The right wing has played every regular season and playoff game since the start of the 2011-12 season.

The club record for consecutive games played is 330, set by Anze Kopitar from March 21, 2007 to March 26, 2011. If Williams is unable to play on Thursday, Mike Richards, who has played in 192 consecutive regular season games since December 22, 2011, would own the team’s longest streak.

The longevity statistics are welcome but not the most important matter of the day. Of greater significance, Williams appeared to avoid a debilitating eye injury, which prematurely claimed the career of Bryan Berard and led to Chris Pronger’s early departure from the game as a player. Manny Malhotra and Marc Staal have also been involved in similar, frightening injuries.

“We talked about it, I had a bad injury when I played, and Robyn was talking about he had a bad injury as the result of the car accident that he was in,” Darryl Sutter said. “…So, thankful. I’d rather he miss a day or a game or whatever it is [if] it has anything to do with vision.”

Williams, the 2014 Conn Smythe Trophy winner, has one goal, three points and a minus-two rating in 13 games.

Justin Williams on the frightening nature of the injury:
[There are] a lot of things that happen during a hockey game that frighten you, but that was certainly one of them. When you get clipped near an eye, it can scare you, certainly. That’s what we have a good training staff for.

Williams, on whether he had ever suffered a similar injury:
Not like this, no. Nothing that scared me as much as this did.

Williams, on his family’s reaction:
My wife had Chris Kingsley on her speed dial. He’s good. He gets back to you quick and helps ease her mind a little bit.

Williams, on the swelling:
It’s the swelling and blood in the eye….That’ll subside when the swelling goes down and the vision will come back fully, from what I understand.

Williams, on whether the team played better on the road than at home:
I wouldn’t necessarily say that. I thought we played better as the road trip wore on. We got down early in a lot of games and we chased games. We did it again last night, but thankfully we didn’t go down more than one goal. But, happy with the win. Back on home ice. Take care of that, and off we go again. It’s a long season.

Williams, on the team dealing with injuries and players moving around:
Hell, we can make excuses for anything. Let’s do it. [Reporter: Are you looking forward to a little stability, hopefully, at some point?] I think what everyone is looking for is just to get their game feeling back, great – playing every day, practicing every day. Getting in the flow of the hockey season, and we should be getting close to that. The longer the season goes, the more in shape you are, the better you feel, the better your hands are, it just keeps improving throughout the year with the more games you play.