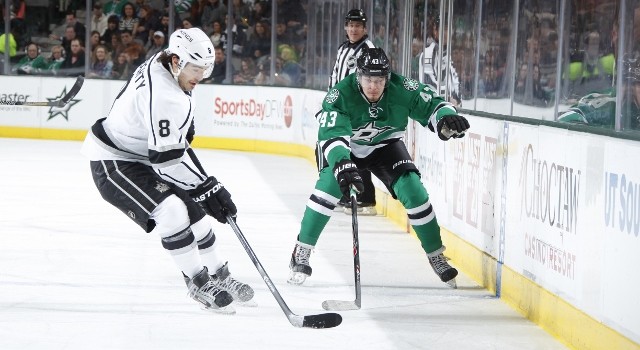 The Dallas Stars haven’t been in a remarkable run of form as of late, though they, like the Kings, haven’t regularly used their full assortment of players. After a 0-2-2 stretch, changes could be made that could balance out their forward group while welcoming an experienced defenseman back into the mix.

According to Mike Heika of the Dallas Morning News, it’s likely that both Valeri Nichushkin and Sergei Gonchar return to the lineup for tonight’s game against the Kings. Nichushkin has been held pointless in two games as he has battled hip and groin soreness, while Gonchar, a veteran of 1,253 NHL games, will make his season debut after having fractured a bone in his ankle during the preseason.

Dallas, one of the league’s premier offensive clubs, will be much closer to full health than it had been when losing 4-1 at Minnesota on Saturday. Of course, the Stars have banked on stars Jamie Benn, Tyler Seguin and Jason Spezza for every game this season.

Though Darryl Sutter said yesteday that Seguin “has a chance to be a superstar in the league,” regular LAKI readers will recall Drew Doughty’s praise of Jamie Benn from last season, when the Kings’ all-world defenseman said that “I think he’s probably the one guy in the Western Conference who has my number more than anyone else.”

On Tuesday morning, Doughty accentuated his evaluation of Benn and saved some praise for the Stars’ style of play.

“He’s a really good player. He plays very well both ways,” Doughty said of Benn. “I think he’s one of the best players in the league, personally. I think he’s probably my toughest player to play against for me, myself, anyway. He gives me the most challenges. I look forward to coming in here and playing against him just because I know it’s going to be so hard to do and I obviously want to try to keep him off the score sheet to the best that I can. It’s going to be a tough job, but I’m ready to do it.

“If you want to make a pass by him, he’s going to pick it off. If you’re going into the corners with him, he’s going to steal the puck from you. He has great hands, great shot. He’s fast. He’s big. He’s physical. He does everything. I don’t think he gets enough credit for how good of a player he really is. You hear about all these other guys getting the credit, but I think he’s one of the best players in the league.”

Drew Doughty, on Dallas’ style of play:
They will be a fast team. They’ve got a lot of skill and then they’ve got lines that can also bang you up, work hard and hit you. They’re a good team. They’ve made some good moves in the off-season, obviously, and I think they’re definitely a better team this year than they were last. This will be a tough challenge for us and it’s about time we win a game. We’ve got to be prepared for a good match-up.

Doughty, on whether the team has played with a strong pace:
That’s what we’re looking to do tonight. We can still do a better job at it. We’re trying to get quicker in all areas of the ice. Obviously we need to stop giving up so many goals against and we need to start scoring more goals. So, I think that’s our plan tonight.