The view from Carolina 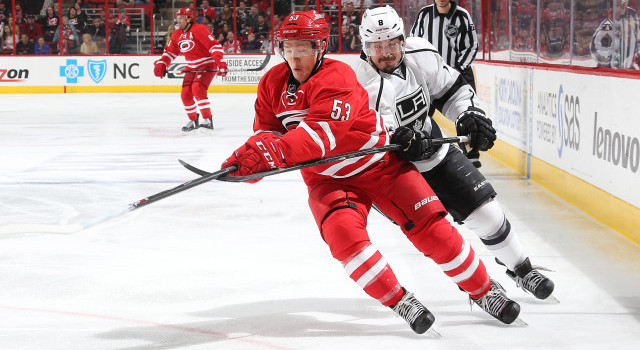 “With the Kings trailing 3-2 late in regulation, Ward made a hard push to his left to get his pad on a shot by Kopitar. While Ward had several timely stops, the stop on Kopitar may have been the biggest.”

“On a mere 22 hours’ rest, against the toughest test the NHL has to offer, Peters stuck to his guns. Alexander Semin, he of the zero goals, lackadaisical play and $7 million salary, a healthy scratch in Saturday’s win over the Arizona Coyotes, remained out of the lineup.”

“The Canes outshot the Kings 9-7 in the opening period and had other good scoring chances against goalie Jonathan Quick. In one 78-second span, Boychuk, Lindholm, Eric Staal and Jeff Skinner all had good shots, forcing Quick into hustling stops.”

“Despite an Alec Martinez goal in the third and a late power play, the Kings couldn’t put another past Ward, who flashed leather to deny his old friend Justin Williams halfway through the third period and has stopped 55 of the last 57 shots he has faced over the past two days.”