On the Carter line, Dallas’ top forwards, and deployment 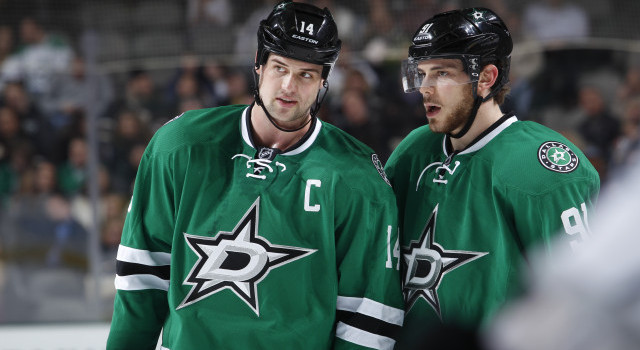 On the surface, the Los Angeles Kings and Dallas Stars don’t share a ton of similarities in terms of their style and structure.

The Kings, who have etched out a strong puck possession game backed by defensive depth and strong goaltending, have been among the toughest NHL teams to score against. With dynamic talents in Jamie Benn and Tyler Seguin, the Stars have developed into a high octane offensive club.

But if there is one similarity at this moment, both teams are relying on a trio of players who have strongly out-performed the rest of the forwards on their team. While there was some interruption of the Tanner Pearson – Jeff Carter – Tyler Toffoli combination in yesterday’s loss at Carolina, that group has played the majority of its minutes together and has accumulated more points than the total of all other Los Angeles forwards.

Recently, Spezza has been centering Benn and Seguin, and that group has also outproduced all other Dallas forwards combined.

At today’s media availability, Darryl Sutter was asked whether he sees any similarities between the two teams’ top offensive performers, and he gave a detailed depiction of what he sees in Los Angeles’ most productive forwards, how match-ups affect line deployment, and who he considers to be the team’s best player on the young season. It’s an awfully interesting read.

Darryl Sutter, on the comparison between Jeff Carter’s line and Dallas’ top line of Jamie Benn, Jason Spezza and Tyler Seguin:
Yeah, I think Benn and Carter probably have similarities because they’re proven players now. Both are looked on as leaders. Both probably play a big man speed game. I think Seguin obviously has a chance to be a superstar in the league, so that would be a difference. I think Tyler’s been really consistent for us and a really good player at both ends of the ice, and playing a lot of situations for us. Tanner’s had a tough time on this trip. A lot of that is because when you do play Tanner with Jeff and Ty, they get the attention, especially with Kopi and Gabby either in the lineup or not on top of their game or just coming back, so they’re going to draw a lot more attention. If you sort of capsulize and look at this just this road trip – say it was a season – if you go into Pittsburgh and they play Crosby early against Carts, and as soon as they have the two-goal lead, then they put Brandon against him. So that’s how they see it, right? So even last night when you see it, Staal, he’s out against Jeff a lot, which means that they still see Carter as more of a threat than Kopi as it went along. It just tells you you need the balance in the lineup. That line is not going to carry us. If we’re looking as a line to carry us, that’s not going to happen. They didn’t play together last night very much, and if you look at Tyler, a big part of their production has been special teams, if you look at the last 10 days. And that’s when you’re trying to get some consistency out of everybody…If we’re only thinking about Dallas, that it’s just Benn versus Carter, we better be going a little farther down the line, saying who’s against who, and who’s against who, and who’s against who…Last year we had seen a lot of the Russian boy with those guys, you know, he’s a real complement to their line. He’s probably a player similar to Tanner. Spezza’s been there lately, but Spezza can pretty much play anywhere on their team when you look at how they’re set up. They have a pretty forceful group of forwards when you look at it. So, quite honest, I’m not sure who’ll play there. I don’t think they look at it like that, either. I think they probably do it more on a game basis. There’s very few lines in the league, when you look at it. There’s no ‘lines.’ There’s ‘twos.’ It’s the way it works. It’s very seldom. Jeff and Tanner and Tyler get talked about because they’ve had a little bit of offensive success and they all wear numbers in the 70’s, but how much they actually play together, if you’d actually broke it down, you’d see it a little bit different. Hey, Tyler’s probably been our best player, at least 12 games in, when you look at all situations. Not just offense, but if you look at the whole thing, he’s probably been our best player.