Kings in “wait and see” mode re: personnel; line rushes 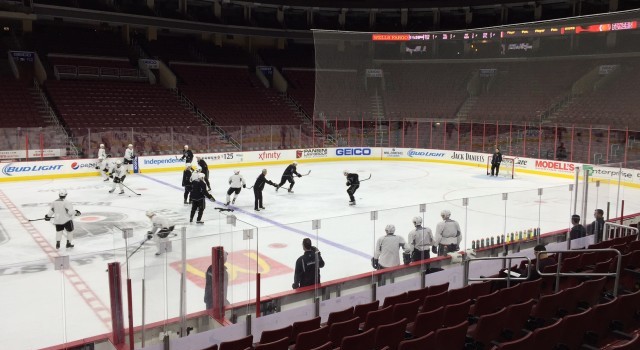 The Los Angeles Kings are playing “wait-and-see” in regards to their personnel options in the wake of Anze Kopitar’s injury, hockey operations told LA Kings Insider.

It does not appear that Kopitar, who suffered an upper-body injury during the second period of Sunday’s 5-2 win over the Columbus Blue Jackets, will play tonight against the Philadelphia Flyers as the Kings open a five-game road trip at the Wells Fargo Center. He skated with Marian Gaborik as an extra during the team’s line rushes.

“Everything’s just a learning curve here,” LA Kings Insider was told by a member of the club’s hockey operations, who said the team’s current personnel inflexibility is “new ground.”

The Kings can’t recall a player from AHL-Manchester because they do not have enough cap space. Because no decision has been made yet on whether the team will receive any cap relief during Slava Voynov’s indefinite suspension – the Kings have been in ongoing conversations with both the NHL and NHLPA regarding the matter – they are still weighing their options as of this morning.

Trevor Lewis took part in line rushes as a fourth line center, though that is not a clear indication that the IR-designated player would be activated and able to play tonight. One way the Kings could free up cap space would be to place either Lewis or Gaborik on Long Term Injured Reserve; given that both players have resumed skating, that may not be the preferred option at this point.

There is the provision that would allow the team to ice a lineup with 19 players tonight and apply for an emergency call-up, and it appears that may be the team’s only option at this point.

Via Lisa Dillman of the LA Times, following a conversation with Dean Lombardi:

Line rushes from the morning skate:

This is obviously a fluid situation and more will be learned throughout the day. Should the Kings play with only 19 skaters tonight, Lewis, Gaborik and Kopitar would be out of the lineup. Lewis is currently on injured reserve, retroactive to October 8.