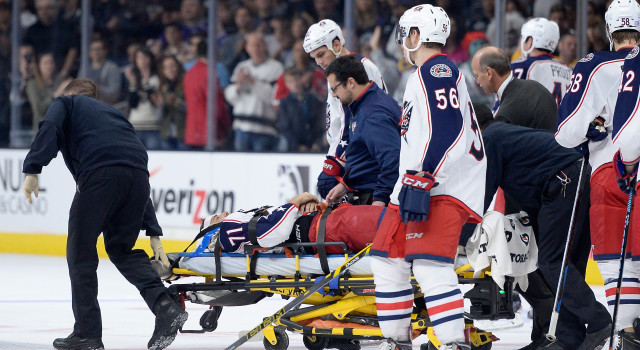 Columbus Blue Jackets winger Nick Foligno has movement in his extremities and will travel home with the team after being stretchered off the ice when his head struck linesman Shane Heyer in the third period, per Aaron Portzline of the Columbus Dispatch. Foligno was battling with Jeff Carter for a loose puck in the neutral zone.

From Aaron Portzline of the Columbus Dispatch:

“Several Blue Jackets players said they were informed by the training staff that Foligno was going to be OK, that he had feeling in all of his extremities and beyond.”

Nick Foligno is alert and speaking with the #LAKings medical staff. He will remain at STAPLES Center for evaluation. #CBJ

#CBJ announce that Foligno is alerting and speaking with medical personel. He is not being taken to a hospital as of this time.

Word from the room is that #CBJ LW Nick Foligno has movement in extremities and beyond, and early signs suggest he'll be OK.

Dwight King, on whether all the players were affected by Nick Foligno’s injury:
Yeah, you don’t want to see anybody get hurt. It looks serious when you first are going to it, so you just hope for his health.

Tyler Toffoli, on Nick Foligno’s injury:
I didn’t really see it. Obviously when he’s down like that, you don’t know what’s wrong. Hopefully he’s OK and he can be back soon.

Mark Letestu, on Nick Foligno’s injury:
Everybody loves Nick in this room. To see him go down and not move, it’s a scary sight for anybody. The circumstances of the play, it’s a total freak thing. It’s just unfortunate. He probably didn’t even see it coming. It’s hard to see any teammate go down. But like I said, the guys love Nick. And to see him down, I’m sure it was going through everyone’s mind.