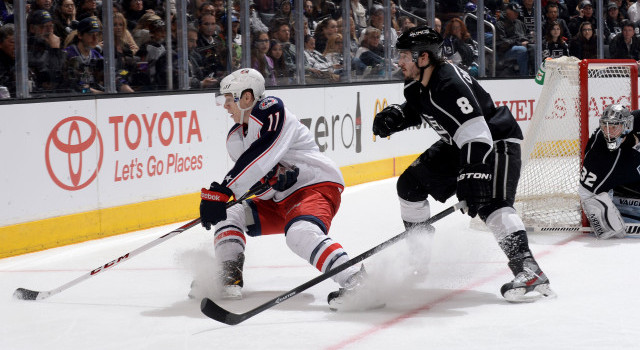 Los Angeles and Columbus – or, #lumbus, as some Kings fans refer to Ohio’s NHL team – are a pair of teams with shared personnel backgrounds.

The Kings traded for Jeff Carter and Marian Gaborik in 2012 and 2014 – and won the Stanley Cup both years after riding a post-trade offensive surge.

Jack Johnson has three assists in seven games and is a workhorse on Columbus’ back end, while Adam Cracknell, who attended training camp with the Kings, has appeared in two games with the Blue Jackets.

And, of course, there’s the cross-league friendship between a pair of digital teams that have keen senses of humor and the freedom to act upon it on social media platforms.

As for the on-ice action? Well, let’s just say the rivalry isn’t quite as chummy. Carter is a persona non grata at Nationwide Arena, and several recent games between the teams have featured a disproportionate share of post-whistle exchanges and scrums. There was also the incident that followed an April 18, 2013 game between the teams when Brandon Dubinsky caught Drew Doughty with a non-gloved punch during a pile-up after the buzzer that the Kings felt was a cheap shot. Dubinsky was assessed a match penalty on the play; it was later rescinded.

The Blue Jackets have always relied on an excellent work ethic, and over the last two years they’ve supplanted a heavy style with top-end skill, improved scoring depth and high quality goaltending.

Columbus will be looking to come out to a stronger start after having fallen behind by two goals in each of their last three games, as Aaron Portzline of the Columbus Dispatch wrote earlier today. Though Dubinsky, Boone Jenner, Nathan Horton and Ryan Murray haven’t played yet this season – Murray is on the verge of returning, while Horton’s injury is the most serious – the Blue Jackets (4-3-0) have held their own through seven games and are clearly on an upward trajectory in league standing. The Kings (5-1-1), meanwhile, will look to complete the franchise’s first ever 6-0-0 home stand. Even with key players missing from both teams, there should still be good emotion at Staples Center tomorrow between a pair of teams whose physicality is well respected around the league.

“They’re just a team that, they’re just annoying to play against really,” Doughty said. “They run around, they finish all their hits. They’re dirty in a little bit of ways. At the same time, they’ve got a lot of skill and they’re a good team. It’s not that they’re a bad team to play against, it just sucks when you’re getting hit so often. Every single guy on that team finishes. It’s hard to play against, but it’s something that as the game goes on you get used to and gets you more into the game.”

Doughty is familiar with “getting into the game” against Columbus, having totaled 20 points (4-16=20) in 21 career games in the series.

Doughty, on playing the point with Anze Kopitar on the power play:
I think we’re going to be pretty good together. Obviously me and Kopi work really well together and have for a while. We’ve never really done this before, so it’s going to be a good change. Kopi is an extremely good passer, as everyone knows. I’ve played with some good guys on the point on the power play, but I’ve never really had a guy who is a passer. So I like the looks of that because me and Jeff are both righties and both can be shooters and that’s going to create a lot of threats that way.

Drew Doughty, on Brayden McNabb:
He’s got a lot of upside. He’s a very good player, a very good guy. I thought he did a great job with me in the time that he was in. Now he’s back there with Greener and Greener is going to continue to help him out and he’s just going to become a better player. Having Muzz, obviously I’m more used to playing with Muzzin than I was with Brayden. We’ll have to regain that connection.

Drew Doughty, on his impressions of Ryan Murray:
The only time I’ve ever seen him play is when I play against him. I’m not much of a hockey watcher, but I can see all the upside he has. He’s got good vision. He skates well, moves the puck well, seems like he shoots the puck well. He’s got all the attributes, I think he’s pretty good defensively already but obviously he’s going to be able to get better with experience and with guys to kind of help him out. I don’t really know who his D-partner is on their team right now, but he’s probably the most defensive guy they have out there. And as a second year guy, that’s a pretty big compliment towards him. I think most of the other D are just offensive minded, so it’s good for him that he’s doing that on his own.

Dwight King, on his line setting the tone early in the Buffalo game:
Yeah I think that’s any line’s goal at the start of the game, is playing in the offensive zone. With Kopi and Brownie, they’re big guys who hold onto the puck and can make plays down there. When we do that, obviously we’re effective and that’s the way you want to start any game.

King, on whether skating with Anze Kopitar aids his possession tendencies:
Yeah, you’ve got a little bit more confidence. When you’ve got a guy like that too that can do it so well, it opens up the ice because he draws more coverage to him, which makes it easier to possess pucks down there with me and Brownie. It’s good. He works so hard and keeping the puck, you kind of want to match that any chance you get.

King, on whether his line is looking to make it hard on the opposition:
Yeah, hard in the way of them not having the puck I think is what we want to bring. Like I said, utilize our size, our puck possession and that wears on teams. We’ve all played against teams that have done that to us in the past. It’s something that’s tough to check against and it can get mentally stressful throughout a game.

King, on whether he has a goal to increase his penalty killing usage:
Yeah, I mean it’s something that will get you minutes on the ice. Obviously it’s a responsibility, except there are a lot of guys who can do it so you’ve got to work at it. It helps that we have pretty good structure in here and the plan is laid out in front of us. All you really have to do is go out and execute and work. It makes it pretty simple.