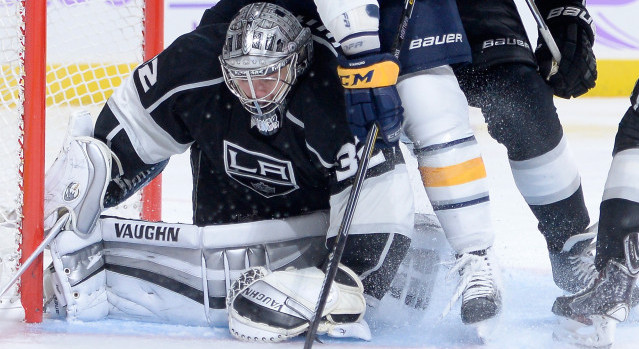 You may have picked up from the other stories noting Jonathan Quick’s Kings milestones that he’s not one to assume an undue amount of credit for his accomplishments, which are many.

“I think the saying the last maybe four or five years is ‘That’s Quickie being Quickie,’” Dustin Brown said. “I thought we gave him more help tonight than we did the previous two nights, so it’s good to see him get it. With his personality, it’s not a big deal and we can just move on because for him, he feels like it’s maybe a distraction with it being a pretty major milestone from a franchise standpoint, so just knowing his personality, he’s more happy to get it done and over with so we can focus on winning.”

With a 2-0 blanking of the Buffalo Sabres on Thursday night, Quick posted his 33rd career shutout and moved past Rogie Vachon into sole possession of first place on the club’s all-time shutout list. He also ranks first on the team’s all-time lists of wins, playoff games by a goaltender, playoff wins and playoff shutouts.

According to Quick, it’s “without a doubt” special to move into first place on a list formerly held by Rogie Vachon.

“Especially like a shutout, it takes 20 men to do that, to shut a team out for 60 minutes, so I’m very grateful for the teammates over the years. At the end of the day, it’s over now, so we’ll keep playing. We’ve got a game in a couple days here.”

Others might call it a park-and-ride approach. The Kings won, they’ll have Friday off, and then they’ll prepare for the Blue Jackets on Sunday. They’ve moved past Thursday’s game against the Sabres.

“We were able to win, get two points. We’ve got to continue to keep getting better. We’ve got a game here on Sunday – Columbus. They’re a great team, they were a playoff team last year, and they’re improved since last year, so that’ll be a big test.”

Quick, on whether having stopped 143 of the last 145 shots faced is encouraging following a summer in which he underwent wrist surgery:
I mean, I think the concern was addressed during preseason – getting in games, game action. I felt a hundred percent confident. It really wasn’t something I was looking to be reassured for…Obviously all these points count the same towards the end result, so these games are just as important as the games in April. So it’s good to try to stock up on points when you can.

Quick, on whether he’s where he wants to be at this time of the season:
No, myself, everyone, we all have a little bit better, so we’ve got to keep working it to find that.