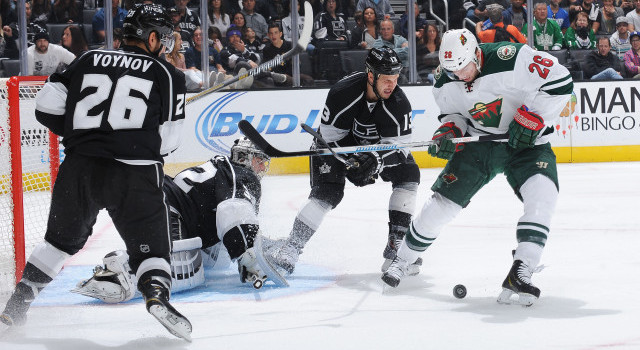 On what made the Kings successful on the penalty kill:
Same as last game. They had a good power play, and we try and pay attention to the details and grind out. Obviously they created a few chances there. We were able to clear out some rebounds, block some shots and just kind of get through it.

On whether he thought the game was a “physical” game:
I mean, every game’s physical. I don’t think it was any more physical than any other game, no.

On whether Mike Richards standing up for Anze Kopitar was something he wants to see:
Yeah. I didn’t see the hit cleanly, so it was tough to see exactly what happened. We’ve got a group where everybody sticks up for each other. That’s all that was.

On Zach Parise’s late attempt that was knocked out of mid-air:
It was a pretty good play there, and it just kind of hit me, so you’ve got to take the bounces when you get ‘em.

On how good it feels to get on a roll early in the season:
It’s great, but at the same time, we’ve got a tough game coming in a few days, so all the focus is on that right now.

On winning at home:
Well, I think in the past few years we’ve been good at home, and I think sometimes with the longer home stands, it’s kind of the same thing every day, so I think it’s good we had a team like St. Louis come in, a great team, so we knew we had to get up for that, and then another really strong playoff team comes in here, and we knew we had to be ready for this. It’s good when you get that kind of competition during the home stand.

On resetting for the next game:
Obviously, you’ve got things to do to take care of your body. That’s kind of what you’re thinking about now. You play 82 just to try to get a chance to play some more games, so you’ve got to be good about [preparing yourself].