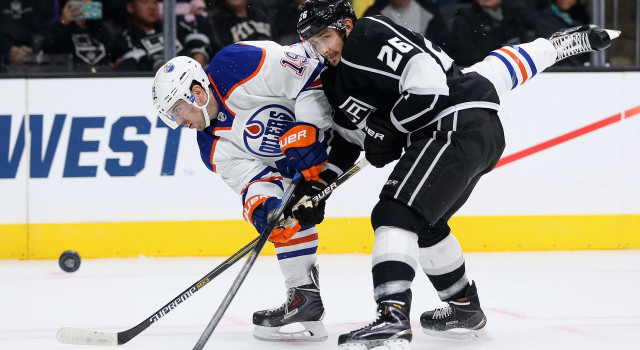 On Andy Andreoff fighting on his first shift of the game:
Yeah, I think he had lots of probably energy for it, and that’s what happened. [Reporter: Did that set any kind of a tone? Because it seemed they were on their heels from the start, and you were all over ‘em.] I think our team had really good energy early in the game. I don’t think there was one particular instance that set that off.

On whether he feels sorry for the opposing coach in such a lopsided game:
I’ve been in that side of the deal, too. I think it was the first period. We scored on some really good opportunities, and that makes it three-nothing. And they had a really inexperienced defense tonight, and it puts them on their heels a little bit.

On what kind of party he’ll throw for his 100th win in Los Angeles:
I would’ve preferred to get Jonathan the cob. Actually that’s not really true, is it? We’ve won a lot more games than that. [Reporter: Still a nice milestone, though, isn’t it?] Yeah, if I was a young guy, it would be.

On Mike Richards stepping in alongside Anze Kopitar and Justin Williams:
Mike did a really good job, and you know what? He and Kopi are comfortable together. They’ve done a lot of it on power play, and quite honest, in times during the regular season when we’ve struggled other years, we’ve put Mike and Kopi together quietly for games. It’s not just Mike. We’re lucky that this team has guys who can play two or three positions…guys that can move around, which always helps out. You know what? When we’re banged up like we are now, you need guys. We’ve just got to get through it. Guys have got to play out of position a little bit.

On what this type of a win “does for the room”:
We haven’t won a division game yet, so we wanted to make sure to try and take care of that. We’d lost, we got the one point out of Phoenix, and San Jose beat us. If we want to keep pace in our division, we’re going to have to try and win in our division. [Reporter: But is how you win sometimes good for the overall enthusiasm in the room?] We’ll move on and get ready for St. Louis. Winning, generally if you play well – and you win – then that usually is good for the room.

On what he is looking for when coaching in a lopsided game:
Well, teams aren’t used to that. This league is not used to that. So just try and stick with what you were trying to do at the outset of the game.

On the impact that being with the team in the playoffs had on Andy Andreoff:
Players, when they come up and don’t play, hopefully they’re sponges. One game does not say much about your career. That’s what I said this morning. I hope plays, and I hope he played well, and he did.