The adjustment to a new LED lighting system at Staples Center is, well, it’s still an adjustment.

“Yeah, for whatever reason it’s pretty bright on the ice,” defenseman Alec Martinez said. “I guess where the fans sit in the stands, it looks a little darker so sometimes when the puck gets rimmed around the glass or just kind of goes above the boards in your angle of view you can kind of have a hard time tracking it.”

The installment of the new LED in-house lighting was made in an energy conscious move and is the culmination of a two-year project. Previously, lights used for Kings games and Clippers games used different color temperatures than those used for Lakers games, which were known for producing a lightened playing surface surrounded by darkened seating areas.

The move to LED lighting cost six figures and is part of a seven million dollar renovation of Staples Center undertaken by AEG. Montreal’s Bell Centre is the only other arena in the NHL that uses LED lighting.

New lighting for Clippers games this season is similar to Lakers games.

During training camp, the Kings practiced once and played two preseason games under the new lights, and while the difference was certainly noticeable, there wasn’t a major concern. “It’s like going to the store and buying the curly bulbs,” Darryl Sutter joked at the time.

He did, however, notice that tracking the puck at a certain height required greater attention.

“When it got above the boards [during our practice], I couldn’t see the puck,” Sutter said. “But I thought it was because the seats were black, and there was nobody in them.”

As one reporter noted, it’s somewhat similar to fielders having to track fly balls at the old Metrodome.

It’s not a major issue, and it’s one that isn’t solely confined to the Kings’ line of sight.

“At the end of the day, both teams have the same issue so I don’t really think about it that much,” Martinez said. “If you’re asking me if it’s different, yeah it’s certainly different. It’s hard to explain, but it’s almost brighter on the ice but it’s darker in the building.”

The Kings will have some time to get used to the new lighting. After returning from Saturday’s game at Arizona, they’ll return home for a six-game homestand. 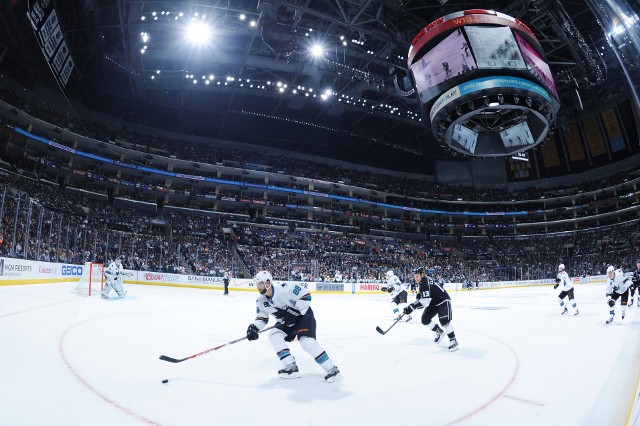