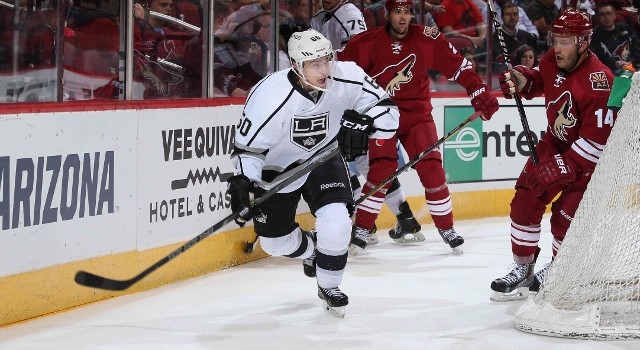 The Kings continued to trim their roster on Monday, assigning centers Nic Dowd and Nick Shore and defenseman Vincent LoVerde to the Manchester Monarchs.

As per Renaud Lavoie, David Van der Gulik was placed on waivers earlier Monday. Should he clear, he would be assigned to the Monarchs as well.

With the assignments (and the assumption Van der Gulik clears waivers and is assigned to Manchester), Los Angeles’ roster stands at 28 players, though only 27 players are available due to a knee injury that will sideline Andrew Bodnarchuk for the remainder of the preseason.

None of today’s moves are surprising or unexpected. There is one interesting twist, however – Jordan Weal, a two-year Manchester Monarchs veteran who more than doubled his points total in his sophomore season, remains with the club. A third round pick in 2010, the skilled center has been lauded for his attention to detail and his practice habits by Kings hockey operations.

“He’s ahead of the two boys we sent down, just on experience, so that’s the difference, clearly,” Darryl Sutter explained. “Dowd, Shore, the three centermen. So you’re not going to take three with you. Because of experience, he was a little bit ahead of them.”

“Yeah, it was something I was definitely working towards in the summer, and last year just trying to improve every day to get to steps like this. I’m just trying to take it day by day and work as hard as I can, learn as much as I can and see where it goes,” he said.

Jordan Weal, on his own preseason performance:
Getting better and better. I think I’m creating some chances, which that’s part of my game, is creating offensive chances. I think I’ve played with some great players and that’s helped out a lot, so I’ve just got to continue working hard and getting better shift-by-shift, game-by-game.

Weal, on the challenge of maintaining his approach through a long season:
It gets tough, especially at the end of the season when you’re just itching to get into the playoffs, it’s tough. But you’ve got to realize that it’s your job now and it’s a lot of fun. You get to come here and play hockey for three hours and go home and relax, so it’s a lot of fun. You’ve got to just think about that on the days that things aren’t feeling so good. You just take that into account and it makes you feel a little better.

Weal, on skating alongside Anze Kopitar and Dustin Brown at practice:
Yeah, it was pretty fun. Those guys are really good. Oh my God, you can give them any kind of pass and it’s going to go top shelf in a hurry. That was a lot of fun, but there are great players throughout the lineup, so whoever I get to play with, it’s going to be fun. I’ve just got to work with them, talk and communicate and do the best we can.

Weal, on watching the 2014 Stanley Cup run from a suite:
Yeah, we were up in the suites just watching. It was a pretty awesome vibe last year. It was pretty amazing, them coming back in two series and doing what they did again, it’s a special group in here.

Weal, on Anze Kopitar:
He’s definitely working his way up in the charts for the best player in the league, I think. Every pass he makes is on, every shot he makes is on. He never really takes anything off. You can tell that in practice when you see him a lot and stuff like that. It’s pretty cool to watch.