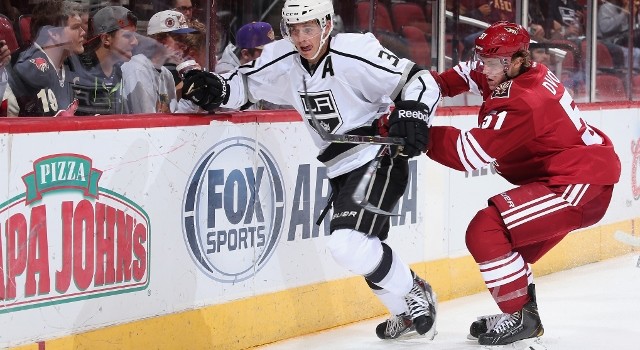 Lines and extras from this morning’s skate:

-Martin Jones left the ice first, so expect him to draw the start against the Ducks. #LAKingsPreseasonGoalieTweetOff

-Judging from those who remained on the ice after the morning skate, expect Dowd, MacDermid and Miller to sit this one out.

-It looks a bit strange to see King and Nolan on opposite sides, but hey, that’s where they were aligned during line rushes. I’m doubt there’s anything to read into there.

-Tonight’s game will be the first FOX Sports West-broadcast game of the year. Bob and Jim are on play-by-play and color commentary, while Alex Curry and Sean O’Donnell will provide reports and analysis with Patrick O’Neal currently on the Angels’ train. I’ll interview Alec Martinez on the bench before the game and will also interview guys from the dressing room after the game.