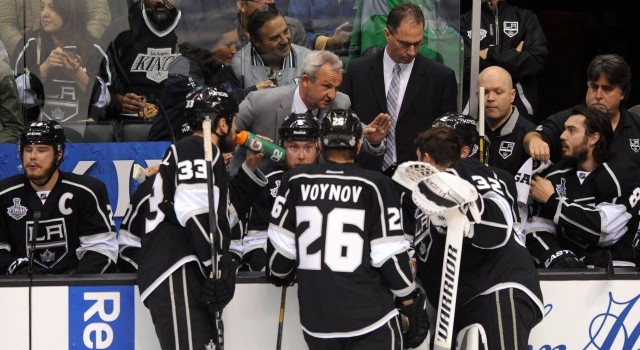 On why it has been so difficult to repeat as champions in the NHL:
It’s probably cause it’s the toughest trophy to win, so to do it back-to-back, especially in the salary cap [era] in a parity league – I mean, if we’d have lost Game 7 to Chicago in the conference finals, then we wouldn’t be talking about it. It tells you how close it is. [Reporter: What will it take for you to do it?] Probably make the playoffs first. That’s the first significant step.

On how Drew Doughty is:
Really good. I’m sure you talked to him.

On how Jonathan Quick looked:
He feels good. You know, we’re just setting training camp up. We didn’t have five months off. We had just a few weeks, so we’re setting training camp up to make sure our guys are ready to play the last three games. So, really, we only play two games in 10 days when you look at it back-to-back. I mean, the doubleheader is really one game for us, and then we play Anaheim at home on Thursday. So we play literally two games in 10 days and we play three in the last [week]. So that’s what we’ll set up for all those guys. And I’m not answering any more questions about Doughty, Quick, Stoll, Cliffy, all the guys that are not ready to play.

On why Marian Gaborik clicked so well with Anze Kopitar last year:
I think they click because we told them right away that we weren’t going to split ‘em up. So it kind of puts the onus on the players, not on anybody else. Basically, everybody who plays with Kopi clicks. Gaborik’s a high-end talent with a high work ethic, so that should fit into our group. I mean, we needed some scoring from the left wing. It’s not one-dimensional. It has to be the whole package, and he was able to do that.

On what Kopitar does that allows people to play with him “so easily”:
He’s one of the best players in the league. I mean, he’s led the playoffs in scoring – probably, if you did it, the last thre playoffs combined, he probably is leading it. It tells you what kind of player he is, and he doesn’t get much recognition for that. He gets, quite honest, now that we’ve played longer than much other teams, now he gets recognized for the…[brief audio skip]…offensive part.

On having referred last year to needing 100 points to make the playoffs:
It secures a spot. The sooner you can hit it the better, if you look at it. We got a hundred on I believe the last game of the year, but we secured it with, what, about four games left. So if your goal is a hundred, well then, you know you’re a playoff team…I know this story. Everybody’s saying today our goal is to win the Stanley Cup. 30 teams are saying that. Their real, most important goal is to make the playoffs. If you can realistically give your team numbers to hit, it makes it easier for them, because it’s a long season.