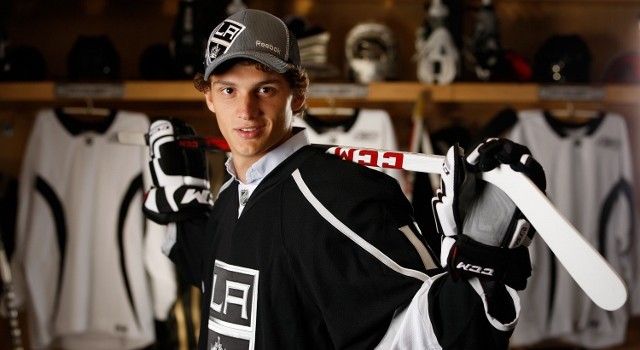 A stick tap to Sheng Peng and The Hockey Writers for circulating this on Twitter yesterday.

Nikolai Prokhorkin, an intriguing prospect selected in the fourth round by the Kings in 2012 who will turn 21 in September, recently spoke with Sovetsky Sport about his Kings alignment as well as several other topics that have nothing to do with the NHL but are certainly worth reading.

There’s obviously a general warning that Prokhorkin’s words have been translated from Russian to English, so keep in mind there may be elements of the conversation that could be out of context, and euphemisms lost in translation.

That said, here’s the greatest bit:

What will be the first thing you’ll buy with your first big salary?

I would love to buy a car. I don’t have one yet. I’m not an expert. I liked a Japanese one… I learned to drive, got my license in May. I managed to drive through the city. And the police stopped me. I forgot my documents at home. The policemen let me go, but asked for some gifts, and I gave him a stick and a puck branded CSKA.

In more newsworthy updates from the article, Prokhorkin has a one-year deal with CSKA Moscow, isn’t worried that playing in the KHL stymies his development, and noted that the Kings haven’t given him any guarantee that he’d play in the NHL. It’s a good, quick read, but again, be wary of minor bits being lost . Prokhorkin totaled 19 goals and 37 points in his 20-year-old season with CSKA last year.

UPDATE: The article was not translated into English by Google Translate.

Here’s the full interview, in English.