Gaborik discusses signing with the Kings 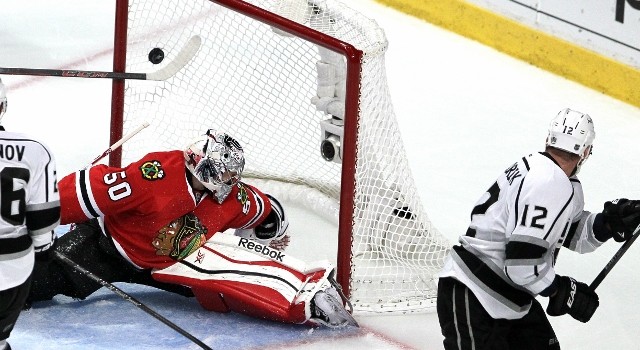 With his seven year, 34.1-million dollar extension, Marian Gaborik has the potential to be a Los Angeles King for the next seven years. While the term is long, Gaborik’s 4.875-million dollar cap hit is manageable at a time when league revenues are continuing to rise, which pushes the salary cap upward. When speaking with reporters on a Wednesday conference call, he also noted that there is no no-movement or no-trade clause that was a part of the deal.

Continually referencing his comfort with the organization, Gaborik said that “Of course I wanted to stay here.”

“I won a Cup, and being with this group and this organization made me really feel like at home. Just the winning tradition that really made a difference,” the 32-year-old said.

Given the way the season unfolded in his time in Los Angeles, there was no driving desire to test the free agent market.

“I mentioned before that I wanted to stay here, and obviously if it wouldn’t have gone on the way that it did, I would’ve maybe tried [testing free agency], but all along I wanted to stay here,” he said. “The organization knew it, the players knew it, everybody knew it, my agent knew it, and that was my number one priority, to try to get the deal done here. I believed that we could get it done, and we did, and I’m very happy about that.”

On the factors that led him to re-sign considering unrestricted free agency loomed:
I mean, when I got here, right away, great group of guys, great team, great fans, and obviously being in a great environment in terms of lifestyle and everything. That made a lot of sense for me. The number one thing – winning a Cup, and just having a chance year after year and going to games to have a chance to win every game there made a lot of sense for me. I know could’ve got maybe more money if I would’ve gone to [free agency], but it wasn’t about money. I wanted to stay here, and be a part of a great team.

On the benefit of security in signing a seven-year contract extension:
Yeah, I think I was going to sign – I was saying when I signed my last contract I think it gives some sort of security, but at the same time, I wanted around six years or something. We agreed on seven years, and I’m very happy about that. It was important, but at the same time, to be with this organization was more important.

On winning a Stanley Cup and signing a seven-year extension over the last two weeks:
It’s been pretty crazy, a pretty hectic time. But obviously I enjoyed it really much, and I’m still enjoying it, and hopefully I’m going to enjoy it down the road as well. To be a part of this, I’m very happy about, and hopefully we can just keep this train rolling.

On why he quickly “clicked” with his Los Angeles teammates:
I don’t know. The first day I got here, the guys welcomed me very warmly and great, and right away I felt comfortable. That’s very important, to feel comfortable off the ice, and…to play on the ice, as well. To play along Kopi and at first Willie, and then Brownie, I know playing along one of the top centers in the league, and just the way we clicked pretty quickly, it was great. I’m very happy about that, and I’m looking forward to more wins.

On appreciation of long-term security having been traded twice at the deadline:
You know, you can sign for 10 years or however long, and you still can get traded. I was signed for five years, I got traded, and then I got traded again. Any player can get traded, so I wouldn’t put it in that category. But of course to be signed for this long gives you some sort of comfort and security, but at the same time, you never know what can happen. So hopefully we can keep going, and hopefully I’ll stay healthy and contribute and play well. That’s the bottom line.

-More from earlier today on Gaborik, including how it affects Los Angeles’ financials
-Stick tap to Frozen Royalty for providing audio