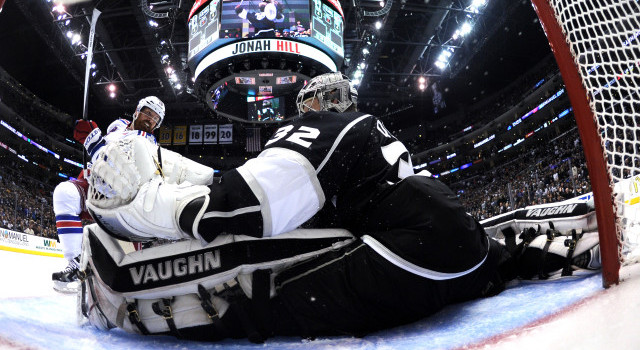 On whether the mentality is to play similarly to Game 4, or to find “another level”:
Find different ways every game. I don’t think last game will have any bearing on this game, as Game 1 would be on Game 2 or 2 on 3.

On having previously said Anze Kopitar never has a bad game, and whether it has always been that way:
I think he’s been a really consistent player. Yeah, I would say that. Instead of going into it, I’d say that.

On the importance of getting off to a strong start, having “dominated” late in games:
Well, I think domination in third periods is not the right way to look at it. I mean, there’s different reasons that you have good third periods. Maybe you’re down. Maybe you’re up. Maybe you got penalties or power plays. Lots of different reasons for third periods, the way they are. Quite honestly, you’re probably saying that because of shots for and against, right? It’s pretty much irrelevant. If you only had one shot and you needed that to score the goal and you did, then you’d take that, so. How important is a good start? Well, that’s why they put time on the clock always, that’s when it starts. Then you get 30, 40 seconds of it, then somebody else gets to go. It’s not just the start. I mean, what does ‘start’ mean? Does that mean shift, period, till the first time out, O zone, neutral zone, D zone, faceoff? What does it mean?