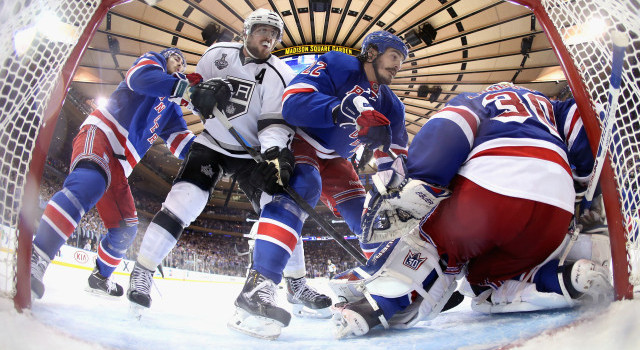 Anze Kopitar, on the difference in the game:
I didn’t think we had a great start. There were a couple pucks on the goal line that we weren’t able to cash in on, and we’re going to have to do a better job in Game 5.

Kopitar, on having a chance to close the series out at home:
It doesn’t mean a whole lot. We wanted to close it out tonight, and we didn’t do it. But now we’re going home, and we’re going to try to close it there.

Kopitar, on whether Henrik Lundqvist was good, or whether L.A. needed more traffic:
I think we can do a better job getting to him. As I said, I think a couple times when we did make it tough on him, the pucks were sitting there. But the pucks that he’s going to see, he’s going to stop. That’s just how it is.

Kopitar, on what was said during the second intermission:
Nothing special. Just do what we do here.

Mike Richards, on the late puck on the goal line:
I saw it. It is what it is. We had some chances, didn’t score on them. They scored on theirs. We could still do some better things for a more consistent period of time. We’ll look at it, watch some video, correct a couple things and put our best foot forward on Friday.