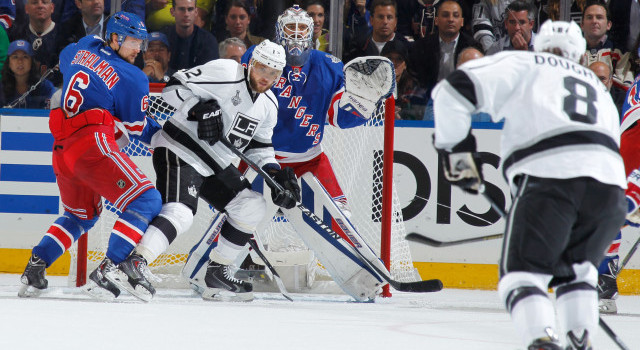 On New York’s intensity at the start of the game:
I thought they were a little better than us early on in the first period. I didn’t think we had our best effort, but I thought we took over the game from there. They got some lucky bounces on their goals. But we can’t feel sorry for ourselves. We didn’t score enough goals to win and that’s the bottom line.

On Henrik Lundqvist:
He played very well for them tonight. He came up with some big saves at some big times. We knew that he was going to play like this every game. We need to get more bodies in front of him. We need to bury our rebounds and pucks are laying behind him, those have to go in too.

On their mentality after the loss:
This one is over. We’re going home in front of our home fans at Staples Center. We’re excited. We can learn from what we did wrong, but move on.

On whether they can win Game 5 with a performance similar to Game 4:
Yeah, we have full confidence in this team, in our team no matter what. We had an OK effort tonight, but OK isn’t good enough against this team. So now we just need to come out with our best effort of the series. And if we do, I’m pretty confident that we will win that game.

On whether the fourth win in a series is the hardest:
Yeah, we knew that coming into tonight and we had an OK effort but it wasn’t good enough. Now we know it’s even tougher. They have a little bit of momentum on their side. They’re going to be feeling good about themselves. So we need to shut them down quickly in that first period of the next game.