Stoll: “There’s not one selfish guy in that room” 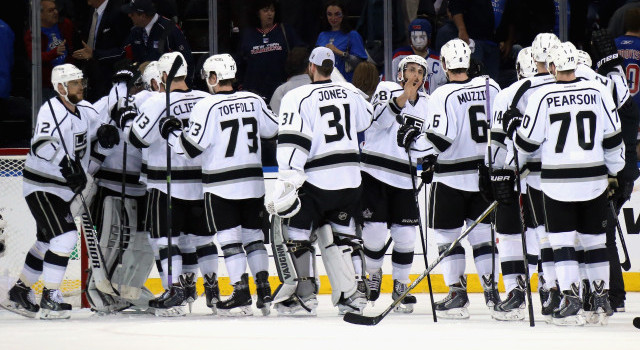 There was a discussion last week about the camaraderie on this Kings team, and Dean Lombardi referenced Jeff Carter insisting that Marian Gaborik stay at his house and Mike Richards taking Gaborik out to breakfast in Winnipeg on the winger’s first morning with his new teammates as examples of the close knit group.

It was a subject that was discussed by the players themselves during an off-day conversation with reporters at Madison Square Garden.

“We’ve got good guys in the room,” Jarret Stoll said. “We’ve got good people. We’ve got guys that want to play the right way, aren’t selfish. There’s not one selfish guy in that room. We understand if there is a selfish guy in that room, we’ll either kick him out or he won’t play. That’s honestly the way it will work. Yeah, we all care about each other. There’s no cliques on our team. There’s no some guys going off here, some guys going off there. We all do things together on the ice and off the ice. We get together a lot. We all live fairly close to each other down at the beach, five, ten minutes apart. So that helps, getting together, doing things. We train together. We try to train together as much as we can in the off-season, which I think also helps. Yeah, when you come into the dressing room, you know everybody. You know everybody really well.”

Carter, who joined Los Angeles in February, 2012, recalls what awaited Gaborik this year.

“It’s a pretty easy team to come into,” he said. “Right from day one, the moment you walk into that room, you feel welcome. It says a lot about the type of people that Dean and the management, the coaching staff, bring in. Real character, quality people. It’s all about winning. The moment that guy walks in the room, you do whatever you can to make him feel comfortable, part of the team. You pull him along.”