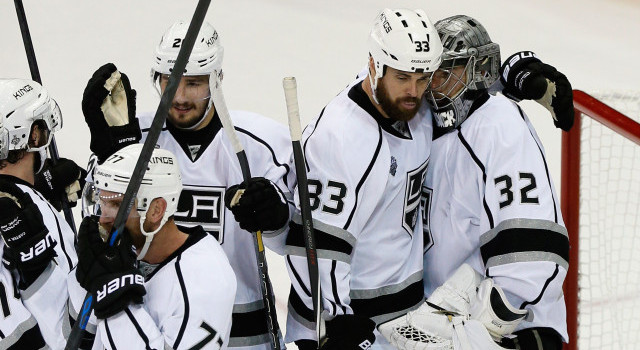 There are some similarities in the circumstances approaching Game 4 of the Stanley Cup Final in 2012 and Game 4 in 2014. On one hand, the Kings won Games 1 and 2 in overtime before pitching a Game 3 shutout in both series. On the other hand, the Kings are currently on the road and do not appear to be burdened by the distractions that inevitably came with the franchise’s first potential Stanley Cup Final close-out game – one that took place on home ice.

“I think potentially, maybe not everyone, but there were some issues that maybe got us sidetracked a little bit,” Justin Williams recalled of Game 4 in 2012. “The thought of winning a Cup, being one game away, family issues, ticket issues, all that stuff. That can maybe sidetrack you from the end result. We’ve got the rest of our lives to see our friends and family, make sure they have tickets and all that. We have, you know, usually one chance, and this is our second chance to do it, to win a Stanley Cup, to be remembered forever. That had a little bit to do with it.”

New Jersey went on to win Game 4 at Staples Center. The Kings would close the series out in Game 6 on June 11, 2012, which will be two years to the day of tomorrow night’s Game 4.

“Game 4 was at home. There was a lot of distraction,” Sutter recalled. “I think that was a lesson learned not just for our players but for our whole organization. We were trying to keep our players as a little inner circle, which they still do. But the circle got a little bit of infringement.”

Drew Doughty, on what he remembers from 2012:
It’s just an exciting time. I don’t think you get any more nervous or anything. I treat it, a lot of other guys treat it, as if it’s another game. Yeah, you get a little nervous maybe the day before knowing you have the possibility to win it. At the same time so many things could happen that you won’t win it, as well. I’m just trying to treat it as a regular game, just trying to play as well as I can. Yeah, just go in there being confident in our team, hoping we can win it.

Jarret Stoll, on what the team can put to use in Game 4 that they learned in 2012:
No let-up. Be as desperate before Game 3. We knew we needed to be a desperate team, play a lot better, focus on winning a tough road game, tough building, just come in and try to prepare to win a game, and that’s it. No other thoughts beyond that. That’s it.

Stoll, on any “shock or surprise” that the Kings lead the series three-nothing:
That’s kind of a tough question to answer. You play the games. Our team, we’ve been down a lot this post-season, we’ve been up, been in some exciting games, some long games. We just keep playing, trying to find a way to win. We’ve had some fortunate bounces. But it’s June 10th right now and you need luck, you need bounces, hard work, to still be playing right now. The Rangers have gotten some bounces and luck, too. They’re still playing. Take that for what it is. But you play the games, you find ways to win games. Sometimes you deserve them, sometimes you don’t, but you find a way to win them this time of the season.