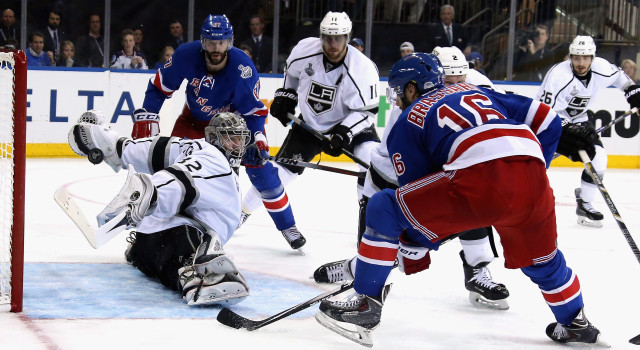 Jonathan Quick, on the team’s level of confidence:
I don’t think it would be any different if we were down 3-0, and they had the lead. You know, we’re just trying to win a game in a couple days here. That’s the focus.

Quick, on what playing at Madison Square Garden meant to him:
It was a playoff hockey game. We were trying to win a hockey game. We did a lot of things the right way. We were able to do that, so now we get ready for the next one. The fourth one is always the most difficult.

Quick, on whether he can ‘taste’ the Stanley Cup:
Nope.

Quick, on how excited he is to be one win away from winning the Stanley Cup:
I would say it’s an exciting time of the year. It was exciting against San Jose. It’s why you play hockey, to play in the playoffs. Obviously nothing’s done, nothing’s finished. We still have a lot to work to do. We do know the fourth is always the most difficult, so we have a lot of work to do.

Quick, on whether he felt like he was going to get the shutout early in the game:
No, you make one save and then you try and make the next. You know, we had a lot of guys that blocked shots, cleared rebounds. Their PK was very good tonight. You know, possibly the difference in the game. You just make one save at a time and you try and get ready for the next one. That’s all.

Quick, on whether he attended games at Madison Square Garden growing up:
I didn’t come to many games, but I watched a few. I would say I was a Rangers fan growing up. You know, it was a good hour and a half away so it was tough to get in here and watch games.

Quick, on whether he played at Madison Square Garden as a kid:
That was the one game I was actually able to catch. They had a peewee championship team that goes to the Québec tournament. We did a shootout in between periods. To all you guys that said I never played here, I did play here once. [Reporter: How old were you then?] 12.

Quick, on how this team compares to the 2012 Stanley Cup winning team:
It’s tough to compare. It was a couple of years ago. Obviously we got a lot of new guys. We got a lot of guys that were around for that run. But we were able to find ways to win games then. We’ve been able to do that so far this year. The only difference right now is that team won 16 games, and we haven’t won 16 yet, so we’re going to keep working.

Quick, on whether he stopped Mats Zuccarello’s shot in the first period with his stick:
I don’t know. Yeah, no, I don’t know. I know there was my stick, his stick. I think one of our defensemen was there, too. I don’t know if it took a weird hop or something. It was kind of a scramble. I don’t know. I forget.

Quick, on whether he questioned if he would be able to play to this caliber after back surgery:
Well, the back surgery was two years ago. This year was the grind. I didn’t have any surgery or anything this year. It’s just more of a let it heal type of mentality for that injury. You know, when I came back, obviously we took all the proper precautions to make sure that it was 100-percent healed, you know, that I was in shape, everything felt good going into my first game with the team. I was playing good hockey when I came back. I don’t think it was much of a question. But obviously it’s something you don’t want to aggravate or anything like that.

Mike Richards, on what makes this team special:
Right now or always I guess? Ever since I came to this team, it’s always been a team that has fun around each other, fun to go to the rink, enjoys each other’s company. It’s no different to this day. We seem to be a big family. I know a lot of people say that. I’ve been on some close teams, but this is probably the tightest knit group that I’ve been a part of. I think it shows on the ice how hard everyone plays.

Richards, on whether his goal gave the team a lift:
I think Carter’s goal was the big one. In a series, we haven’t played well off the start. I thought we played a pretty good first period. To get that at the end of the period made us feel good going to the dress the room. Any time you can increase your lead I think it’s important. Muzzin got the one in the second, and then another one late in the third. We’re a team that plays a lot different I think when we have the lead and we play with confidence. We don’t sit back. We just keep pushing. I thought we did a good job of that tonight.

Richards, on how much they think about New York staging a comeback:
Well, we know it’s possible. The last game’s always the hardest. No matter what series or what the series is at, it’s always the hardest to do. We played a good game. We’re going to have to play a better game if we’re going to want to have success. It’s a good hockey team over there. We’re fortunate right now to get some bounces. Hopefully that continues.

Richards, on whether Jonathan Quick gives the team confidence:
Yeah, he made a bunch of big saves in the first, gave us a chance to get the lead for him. When he’s on top of his game, which he is most of the time, I think that allows us to make plays with confidence. When we can make plays, knowing if something happens, he’s back there to save us. When we start making plays and we’re confident with the puck, I think that’s when we play our best.